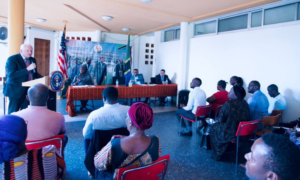 I am honored to be with you here this morning at the start of a momentous week in Tanzania’s history, as the nation celebrates the 100th anniversary of the birth of its founding father, Mwalimu Julius Nyerere.

We at the U.S. Embassy are proud to offer our small contribution to these celebrations, in the form of the exhibit that we are opening today, a historical exhibit looking at the friendship between Mwalimu Nyerere and U.S. President John F. Kennedy.

Sixty one years ago, Mwalimu Nyerere traveled to the United States to meet President Kennedy at the White House. From this initial meeting, the friendship between these two leaders became the foundation of a friendship between nations and peoples that has stood the test of time. It was, as our exhibit is titled, a friendship that shaped history.

When these two leaders met for the first time, Tanzania – or Tanganyika, as it was then known – was a very young country. In fact it had not yet won full independence, which came later in 1961. So, Kennedy understood the enormous task that Mwalimu Nyerere was facing, to build the nation and bind its people together. This is why Kennedy described Mwalimu Nyerere as an equal to America’s founding fathers Thomas Jefferson and George Washington.

Nyerere, for his part, admitted the great similarities between the ideals America was founded on and his hopes for his young country. “Your country was built on great idealism. So are the countries that we are trying to build in Africa,” he wrote in one of the many letters that the two leaders exchanged.

Kennedy was so impressed by Mwalimu Nyerere’s vision for Tanzania’s development that he directed two of his signature programs, USAID and the Peace Corps, to prioritize efforts in Tanzania. In fact, the first group of Peace Corps volunteers landed in Tanzania in September 1961, only two months after Kennedy and Nyerere met.

Out of the mutual respect and admiration felt by Kennedy and Nyerere came a commitment by the American people to support Tanzania’s development. Through the ensuing six decades, that commitment has never wavered.

Today the partnership between our nations is closer than ever. The U.S. is Tanzania’s largest bilateral donor, and we are working in partnership with the government, civil society, and the private sector to create more peace, prosperity, opportunity, and freedom for both our countries.

This exhibit portrays a friendship that had big consequences, but which was sadly cut short too soon. Kennedy was killed by an assassin in 1963. Since then, generations have wondered how the course of American history would have been altered if he had remained as President and perhaps won a second term.

In the case of Mwalimu Nyerere, Tanzania had the good fortune to have this remarkable man as a fixture of political life for over four decades. In this, the centennial of Julius Nyerere’s birth, I join with all Tanzanians and people around the world in paying tribute to Nyerere’s leadership during a lifetime spent in the public eye: As a young crusader for independence from colonialism; as Tanzania’s founding father and president for over two decades before willingly stepping down; as the force behind the scenes stewarding the country into a new era of multi-party democracy and economic liberalism; and as an elder statesman and promoter of peace and stability around the region.

Above all, we remember Mwalimu Nyerere as an eloquent and committed defender of the dignity of all human beings, especially those living in the developing world who were too often left voiceless. When Nyerere traveled the world speaking at the UN or at different international forums, he made sure their voices were heard.

This is part of his – and part of Tanzania’s – reputation. I believe it is in the spirit of Mwalimu Nyerere that her excellency President Samia Suluhu Hassan has once again embraced multilateralism, and is raising her voice and the voice of Tanzania in bodies like the UN and the EU.

We hope she will visit the White House just like Mwalimu Nyerere did.

Sixty one years ago, Presidents Nyerere and Kennedy planted a seed of friendship between our nations. That small seed has been nurtured through the decades and today it is has grown as big and strong as a baobab tree. With that kind of strength, I firmly believe there is no goal we cannot achieve and no challenge we cannot overcome.

Thank you and with that I am pleased to declare this exhibit officially open!