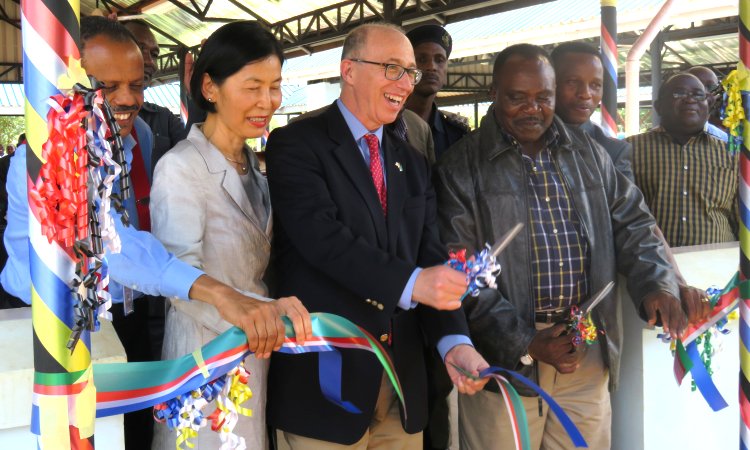 Dar es Salaam, TANZANIA. From December 4 to 6, the Chargé d’Affaires of the U.S. Embassy in Dar es Salaam Dr. Inmi Patterson traveled to Kigoma, Tanzania together with an international delegation led by the U.S. Deputy Assistant Secretary of State, Bureau of Population, Refugees, and Migration Mark Storella, and representatives of the Government of Tanzania to formally inaugurate a new facility where refugees will be processed for third country resettlement.

“I am proud of what my country has done in response to the needs of people fleeing crisis in East Africa,” said Deputy Assistant Secretary Storella during the ribbon-cutting ceremony.  “In the last five years, the U.S. has resettled over 40,000 Congolese (DRC) refugees to the U.S., including over 11,000 from Tanzania.  This effort has provided a new beginning and new opportunities for thousands of refugees.”

As the world’s leading receiving country of refugees, the United States invested over $4.5 million in the state of the art refugee resettlement facility in Makere, with the aim of resettling many of the eligible Congolese and other protection and medical refugee cases in Nyarugusu Camp.  The United States is actively encouraging other resettlement countries to use the facility to increase their resettlement programs from the region.  The International Organization for Migration (IOM), will manage the Makere facility where partners may conduct processing in an efficient, cost-effective manner for the next several years.