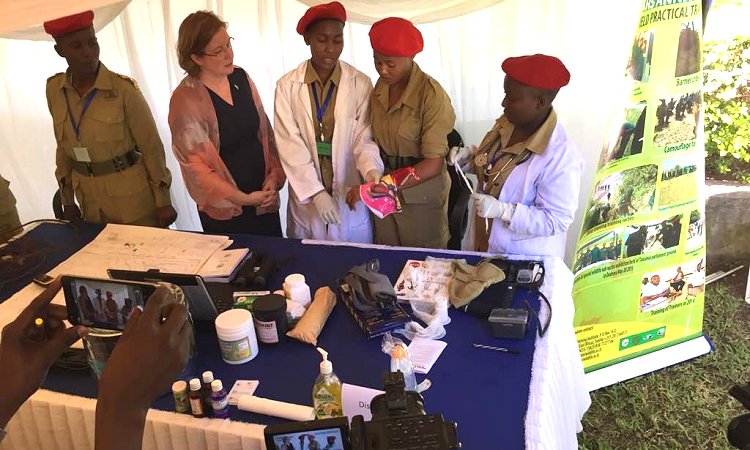 U.S. Chargé d’Affaires Virginia Blaser visiting the Pasiansi Wildlife Training Institute in Mwanza on May 3,2017. The students demonstrated for the Chargé the medical field training they receive. The U.S. Government has contributed to the Institute by supporting the training of nine Pasiansi staf

Highlights Cooperation Between the American and Tanzanian People

Mwanza, TANZANIA. On May 3, Chargé d’Affaires of the U.S. Embassy to Tanzania and the East Africa Community (EAC) Virginia Blaser visited Mwanza for a full-day of activities with a variety of partners, highlighting the strong cooperation that exists between the American and Tanzanian people across a diverse range of sectors.

Chargé Blaser kicked off the day by participating in the 2017 World Press Freedom Day Commemoration, which the U.S. Embassy has supported for the past two years.  “Press freedom is critical in a democratic society that protects the rights of the people,” Chargé Blaser told the audience in her remarks.  She also underscored the importance of journalists and other media stakeholders coming together to share ideas and support one another as part of a broader, global network that expresses a variety of viewpoints and gives voice to citizens’ concerns.

During a visit to the Pasiansi Wildlife Training Institute, which trains Tanzanian game scouts in anti-poaching operations and wildlife conservation, Chargé Blaser observed students demonstrating the law enforcement, military, natural history, and field training they receive.  The U.S. Government has contributed to the Institute by supporting the training of nine Pasiansi staff members, helping to build capacity to protect wildlife in Tanzania.

Chargé Blaser saw first-hand the positive impact of U.S. Government support for security cooperation in Mwanza when she visited the Mwanza Maritime Academy and watched a patrol demonstration from onboard a U.S.-donated Defender Boat provided to Tanzania’s maritime police through the African Partnership for Rapid Response Peacekeeping.  In addition to donating two boats to the Maritime Police, the United States also donated nine other boats to Tanzania and facilitates the repair and maintenance of all the boats.

In the health sector, Chargé Blaser talked to Community Outreach Volunteers who conduct peer-based education and outreach for HIV prevention through ICAP at Columbia University, a partner of the U.S. Centers for Disease Control and Prevention (CDC) and the President’s Emergency Plan for AIDS Relief (PEPFAR).  She also met Peace Corps Response Volunteers based at Bugando Hospital, where they are working to strengthen medical and nursing education and clinical practices.  At the Baylor International Pediatric AIDS Initiative HIV Care Center of Excellence – a facility built and equipped through a Public Private Partnership (PPP) between the U.S. Government and U.S. private sector with USAID support for personnel and management – Chargé Blaser thanked the Center’s staff for providing quality care and treatment for HIV-infected children, contributing toward the 90-90-90 UN goal in HIV testing, treatment, and viral suppression.