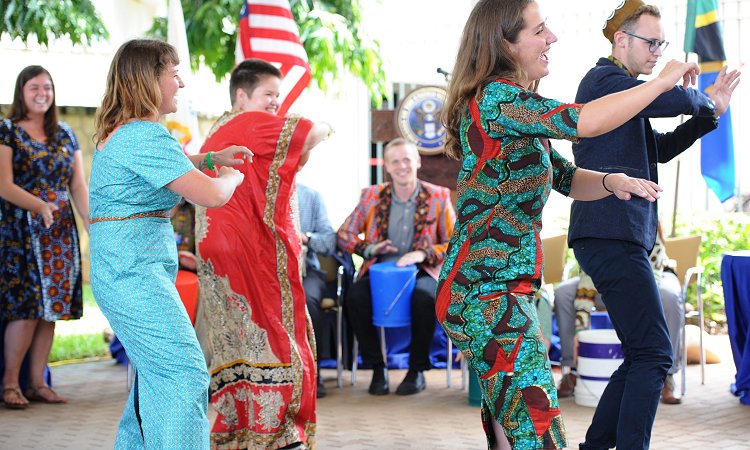 Also in attendance at the ceremony at U.S. Embassy Dar es Salaam were Deputy Permanent Secretary for Health Deogratius Mtasiwa from the President’s Office, Peace Corps Country Director Elizabeth O’Malley, the new Volunteers’ district supervisors who will work with them over the next two years, and former Peace Corps Volunteers from around the world.

Ms. Blaser told the new Volunteers:  “What will define you, what will set you apart in the minds of the Tanzanians with whom you will live and work over the next two years, is your commitment to friendship, and your desire to forge a peace that cuts across national boundaries and interests.”

Deputy Permanent Secretary Mtasiwa said:  “I urge the communities, government officials and other stakeholders, where Volunteers will be serving, to give you all the support; morally, technically, as well as, helping you to cope with the culture and in learning Kiswahili.  He advised the new Volunteers to “Work hard, do good things, be passionate, love your experiences and put the best face forward to the Tanzanian people.”

Founded in 1961 by President John F. Kennedy, the Peace Corps is a U.S. Government agency that supports about 8,000 Volunteers in more than 75 countries, serving at the request of the governments of those countries. For 55 years, Peace Corps has maintained apolitical and non-sectarian ideals of technical and cultural exchange. More than 200,000 Volunteers have served in 138 countries. Peace Corps promotes world peace and friendship by fulfilling three fundamental goals

More than 2,600 Peace Corps Volunteers have served in Tanzania since 1962. The Peace Corps provides trained American Volunteers who work with communities in the fields of secondary education (math, science, and information and communications technology), health promotion, and environmental education.