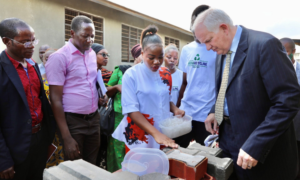 The latrine was constructed using a $7,000 grant from the Ambassador’s Special Self-Help Fund, a program of the U.S. Embassy that supports small-scale revenue-generating projects that encourage community self-reliance. The recipient of the grant was PHEDES, a local non-governmental organization run by director John Ambrose and project manager Hellen Sailas. Helen is an eco-entrepreneur who developed a method to make bricks from melted plastic waste collected on the beaches of Dar es Salaam. Thanks to the grant from the Ambassador’s Special Self-Help Fund, she now has developed her own firm, Arena Recycling Industry to produce more eco-bricks.

Speaking at the event, Ambassador Wright said that efforts to protect the environment can also create new opportunities. “I applaud the community and PHEDES for showing creativity and imagination to solve two problems at once – ocean plastic and water and sanitary systems.  I am so impressed at the vision that Hellen had to clean up the beaches of Tanzania, and then to repurpose the plastic collected into the bricks used to build the new latrines right here at Karume Primary School.  Through this project, we have all contributed to cleaning up plastic waste while filling a need for the local community.

The Ambassador also said that the project demonstrates the U.S. government’s commitment to supporting education in Tanzania.

“When schools are safe, sanitary, and well equipped, students learn better. Thanks to this latrine, the students at this school will be able to focus on their studies. This is just one small way that the U.S. government is investing in Tanzania’s future by expanding educational opportunities for young people.  Over the past 5 years, The U.S. Government has invested $67.1 million in Tanzania’s primary education system with an age-appropriate, curriculum-defined reading, writing, and arithmetic program for Standards 1 through 4 reaching 825,000 students and nearly 10,000 teachers in 42 districts by giving teaching and learning materials, teacher trainings and community engagement activities in 2018 alone.”