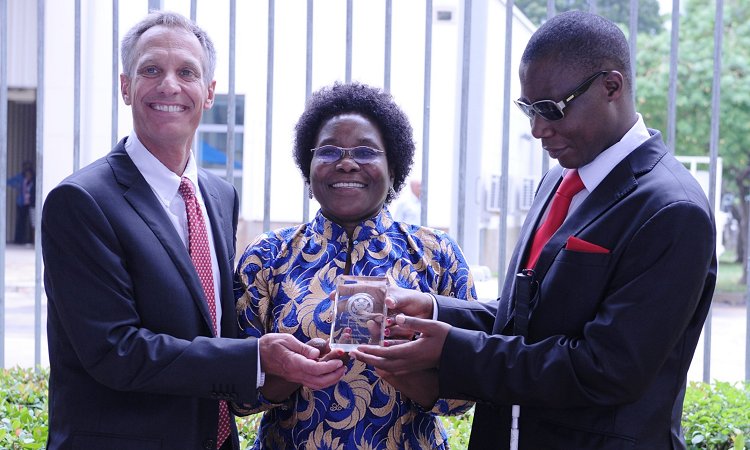 U.S. Ambassador Mark B. Childress, Deputy Permanent Secretary Amon Mpanju from the Ministry of Constitutional and Legal Affairs, and the Executive Director of Under the Same Sun Tanzania, Vicky Ntetema, hold the 2016 IWOC award.

U.S. Embassy Dar es Salaam today honored Vicky Ntetema, Executive Director of Under the Same Sun Tanzania, as a recipient of the 2016 International Women of Courage (IWOC) award.  Ms. Ntetema originally received the award from Secretary of State John Kerry on March 29 at a ceremony in Washington.

The ceremony at the U.S. Embassy was attended by Mr. Amon Mpanju, Deputy Permanent Secretary of the Ministry of Constitutional and Legal Affairs, as well as other Tanzanian government officials and civil society advocates and leaders.

In his remarks, Ambassador Childress lauded Ms. Ntetema’s advocacy, saying “We stand here today with our international partners and Government of Tanzania partners committed to ending these attacks because they are a gross violation of basic human rights and because persons with albinism have the right to be free from fear in their own homes.”

During the ceremony, Vicky Ntetema said “I urge the police in Tanzania to work with their colleagues in Interpol to further investigate these killings and expose cross-border trade of People With Albinism (PWA) organs and trafficking.”

Dedicating the award to PWA and their families, Ms. Ntetema specified that, “This prestigious award is for all persons with albinism.  It is for babies, children, women and men who felt every inch of the machete attack as death stared in their faces; It is for all those who have added physical disability to their low vision, just because witchdoctors ordered their body parts for a client;  The award is for those without albinism who have been forced to leave their homes and villages in order to protect their loved ones with albinism; and for those who live in constant fear because they witnessed the macabre killings and know that the murderers would recognize them.”

Vicky Ntetema is Tanzania Executive Director of Under the Same Sun, an NGO dedicated to ending the discrimination and violent attacks against people with albinism. A decade ago, as the BBC’s Tanzania Bureau Chief, Ms. Ntetema went undercover to investigate the illicit business of buying and selling the body parts of people with albinism. Posing as a potential buyer, she infiltrated networks of witchdoctors who claimed the body parts could bring luck to purchasers. Death threats followed the airing of Ms. Ntetema’s stories, and temporarily forced her into hiding. But her courageous reporting galvanized international attention and led to a series of arrests and convictions.  Ms. Ntetema has remained fearless, eventually leaving journalism to fight with international public and private sector partners for the human rights of people with albinism.

Established in 2007, the annual Secretary of State’s International Women of Courage Award honors women around the globe who have exemplified exceptional courage and leadership in advocating for human rights, women’s equality, and social progress, often at great personal risk.   This is the only Department of State award that pays tribute to emerging women leaders worldwide.