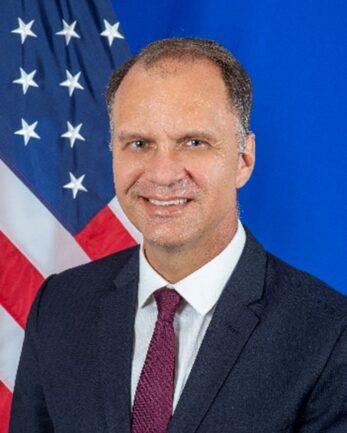 Robert Adrian Raines is a career member of the Senior Foreign Service with the rank of Counselor.  Prior to his arrival in Tanzania, Mr. Raines served as the Acting Director for Policy, Planning, and Resources in the Office of the Under Secretary for Public Affairs and Public Diplomacy (R/PPR) and as Director for Strategic Communications at the National Security Council.  Other domestic assignments include service in the Near Eastern Affairs Bureau and in the Bureau of Conflict Stabilization Operations.  Mr. Raines’s overseas postings include Islamabad, Pakistan; Beijing, China; Quito, Ecuador, and Guangzhou, China.

Mr. Raines received a master’s degree in International Security Studies at the National Defense University, College of International Security Affairs; a law degree from the University of Utah; and a bachelor’s degree in philosophy from Brigham Young University. Prior to joining the Foreign Service, Mr. Raines clerked for the Maine Supreme Judicial Court and practiced utilities litigation in Portland, Maine.  He is accompanied in Dar es Salaam by his wife, Madeeha Shams, and their two children.