Remarks by Ambassador Wright at the 2022 Independence Day event. 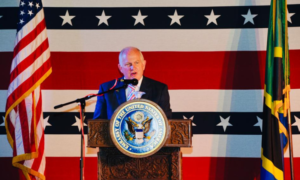 Habari za jioni, karibuni katika sherehe yetu ya uhuru wa marekani. I do not have the words to relay the great joy that my wife, Kathy, and I have in being able to open our doors and share some conversation, food, and drinks with so many great friends, important partners, and esteemed guests.  Thank you for coming!

I want to especially thank our guest of honor, the Honorable Nape Moses Nnauye, Minister for Information, Communications, and Information Technology.  It is a real pleasure to host you here as you represent President Samia Suluhu Hassan.  I also want to thank all our other guests; representatives from the Tanzanian government, members of the diplomatic corps, civil society activists, members of the press, the business community, and all of our other wonderful friends who are making a difference in Tanzania.

I also want to acknowledge the presence of Ashley Collins and her husband, Douglas Crowell.  Ashley is a very talented and well-known American artist who is working with local artists and has plans to showcase the best up-and-coming Tanzanian artists in the United States.  Her efforts will give American people the opportunity to see the talents of Tanzanians.  This is an excellent example of true citizen-to-citizen cultural exchange.  We would love to see more of this.

And I could not forget to mention our awesome entertainment for tonight, the U.S. Air Force Band Winds Aloft Woodwinds Quintet who traveled all the way from Germany to perform tonight.  They have already performed in Bagamoyo, with the Tanzanian Peoples Defense Forces, and tomorrow they will have a concert and workshop at the University of Dar es Salaam. Thanks again to all for being here tonight.

Given the sheer size of this event there is no way that Kathy and I could have done this alone and I want to thank not only the Embassy staff, but also our kind sponsors who have made this evening possible through their generous contributions.  The private sector is crucial to developing the economy of Tanzania and it is a testament to their commitment that they are here in person and through their donations.  Thank you for your support and continued efforts giving Tanzanians opportunities via investment, training, and jobs.

Many of you may be wondering why we are celebrating U.S. Independence Day on June 14, when July 4 is still three weeks away.  Well, there are a few reasons.  Sadly, we have a good part of our senior leadership departing post and we wanted to give them an opportunity to say goodbye to their friends and counterparts.

However, June 14th is not some random day that we choose.  It is National Flag Day.  A day celebrating the American flag’s symbolism:  democracy, justice, and rule of law, themes that are cornerstone to our engagement with Tanzania.

Furthermore, in a few days, June 19th, we will also mark our newest federal holiday, Juneteenth.  As many of you know Kathy and I are proud Texans, and it gives me great joy to let you know that Juneteenth celebrations originated in Galveston, Texas.  Juneteenth is a holiday that commemorates the emancipation of slaves in the United States and celebrates African American culture.  One of the most esteemed U.S. Supreme Court Justices, the great Thurgood Marshall once said, “Where you see wrong or inequality or injustice, speak out, because this is your country.  This is your democracy. Make it. Protect it.”  Juneteenth serves this purpose.  It reminds us that we need to commit ourselves, each and every day, to expanding democracy so that everyone in society can fully participate.

The Independence Day speech is traditionally an opportunity to highlight our achievements in key areas of importance to the U.S. and Tanzania.  And this year we have so many highlights that I am sure I will miss many.  If I had to pick one highlight, it would have to be when President Hassan visited the White House and met with U.S. Vice President Kamala Harris.  This meeting further strengthened the ties between Tanzania and the United States.  President Hassan also met with numerous U.S. government officials, civil society representatives, and businesspeople and her efforts opened many new doors for cooperation and demonstrated the power of diplomacy.  However, as my Tanzanian friends like to say “Kazi Iendelee.”  We cannot stop our efforts as there is still much work to do and people are depending on us.

As you know, the U.S. Embassy is a large institution that works with the Tanzanian government and non-government partners across the country.  From agricultural support to health, from democracy promotion initiatives to wildlife conservation, the U.S. Government brings our expertise, experience, and funding to support local initiatives and institutions.  Last year we celebrated 60 years of the US and Tanzania working together.  Just because our Pamoja campaign ended, does not mean we have stopped our important bilateral relations.  Our partnership continues to grow.

In the area of security, we continue with our robust exchange programs training and cooperating with Tanzanian law enforcement and military leadership.  Last July, for the first time in seven years, the commander of AFRICOM, General Stephen Townsend, visited in Tanzania.  His visit led to further exchanges including two Joint Combined Exchange and Trainings that have resulted in more resilient and prepared Tanzanian special forces.

As you are well aware, a large part of our work with Tanzania is in the area of health, particularly HIV.  Through the President’s Emergency Plan for AIDS Relief, or PEPFAR, Tanzania will receive more than $450 million to support HIV prevention, care, and treatment services in the next fiscal year.  This year also saw the launch of Afya Yangu, a PEPFAR-funded USAID initiative that will invest $250 million over 5 years to improve the health of Tanzanians.

Another important health initiative is our cooperation in the fight against the COVID pandemic.  I am proud to say that through the COVAX and GlobalVax programs, the United States has donated millions of vaccine doses and millions of dollars to Tanzania and other countries around the world to stop the spread of COVID, inform citizens of the true nature of the pandemic, and ultimately save lives.

In terms of the Tanzanian economy, we want to see a competitive Tanzania selling its products around the world, including in the U.S.  Through the American Chamber of Commerce, we promote US investment in Tanzania, however, we also support the small entrepreneur with a good idea, a great work ethic, and a dogged determination to succeed.  Therefore, we also expanded programs like the Advancing Youth Initiative and the Academy of Women Entrepreneurs to help them get to that next level.  Working with the Tanzanian business community, we can further build the entrepreneurial and business capacity of Tanzanians.  As Mwalimu Nyerere said “If real development is to take place, the people have to be involved.”

Every one of the investments and initiatives I have mentioned are aimed at creating a more prosperous, fair, and transparent Tanzania that is accountable to its citizenry.

This is a joyous occasion when we want to celebrate the strong partnership between Tanzania and the United States.  But we are also coming together during a dark time, a time when an ongoing, war of aggression is being waged by Russia in Ukraine.  Going back to the days of Mwalimu Nyerere, Tanzania has been a respected leader in Africa.  People have looked to Tanzania as a country that stood for equality and against oppression and aggression.  Sadly, the international community is currently faced with the brutal and unjust assault of a young and vibrant democracy by its much larger autocratic neighbor.  Even as we speak, Ukrainian civilians are being killed in an unjustifiable war initiated under utterly false pretenses.  Now is the time for Tanzania to stand up and have its voice heard loud and clear on this critically important issue.

As you can see, we had a very busy year filled with much success.  For more than 60 years the US has been a steadfast partner and friend to Tanzania.  This will not change.  Rather, we seek more engagement and more opportunities to grow together for the betterment of both of our nations.

To close, I want to express my gratitude to all those that helped further the relationship between the US and Tanzania, both here tonight and to those that could not make it.  So just for tonight, we will rest on our laurels, enjoy our victories, and look back at all the obstacles that we have overcome.  We still have much work to do that may appear daunting but remember all we have overcome and let that motivate our efforts going forward.  Thank you.