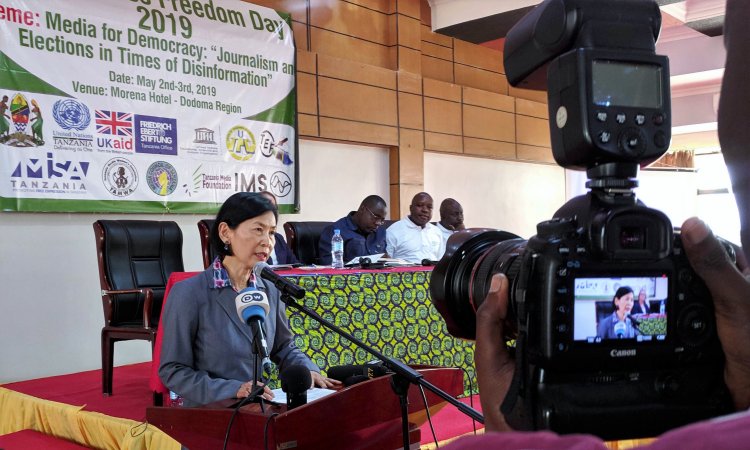 I would like to join my colleagues here today and offer my respects to the family and friends of the late Dr. Reginald Mengi. As we said yesterday on social media, Dr. Mengi’s role in advancing Tanzanian growth and development was immeasurable, as was his impact on Tanzanian press as the founder of IPP Media. Our thoughts and prayers are with his loved ones at this time.

Minister Mwakyembe, Regional Commissioner Mahenge and distinguished media practitioners, regarding the importance of the media, I’d like to start by quoting UN Secretary General Guterres. Our two countries: the United Republic of Tanzania and the United States of America, are both United Nations’ members in good standing. So we can assume that my government and your government; the American people and the Tanzanian people, agree with what their UN Secretary General has to say.

Mr. Guterres said: “No democracy is complete without access to transparent and reliable information. It is the cornerstone for building fair and impartial institutions, for holding leaders accountable and for speaking truth to power.” Let me repeat that, because I think our Secretary General’s words deserve our full attention: (repeat).

We’ll return again later to what the Secretary General said, but first I want to take you on a voyage. Let’s travel together, all of us, for a second through time to the year 1971– and through space –to the United States of America– the country I represent in Tanzania.

In that year, a courageous man gave top secret documents to an important newspaper in the United States. Those documents showed that the American government had lied to the American people about the reasons why the United States was fighting a war in another country; in Vietnam; and about where and how that war was being waged. These papers are known as the “Pentagon Papers” and I am sure many of you remember them.

As one of the Supreme Court justices, Justice Black, wrote at that time: “Only a free and unrestrained press can effectively expose deception in the government.”

Even though those documents had been classified “top secret” by the United States government, the newspaper decided it was in the public’s interest that these documents be published. And it printed those government secrets on its front page.

As you can imagine, the government, my government, did not like that at all. The newspaper was making public secret information about a war that was still being fought. But it did not close the newspaper down. Why? Well, because it did not have the legal power to do so. Now, you may ask: why didn’t the government then just pass a law that gave it the power to close newspapers which published articles it considered illegal? Well, because it can’t. The first amendment to the U.S. Constitution, our basic law, like your Tanzanian constitution, prohibits our parliament from making any law which would restrict the freedom of the press.

An American Senator, Birch Bayh, said at the time that this fight between the U.S. government and the press was underway that when the government says one thing and the people know something different to be the case from their own experience, a “credibility gap” appears. In other words, people stop believing what the government tells them, even when it’s true! And that makes the government’s work much more difficult in many areas.

Since my government could not close the newspaper, even after it had published top secret documents, it tried the next best thing. It asked the judiciary, our courts, to rule that the newspaper did not have the right to publish top secret documents. The government’s court case eventually was appealed to the highest court of the United States, the Supreme Court. And the court ruled that the right to a free press and the right of the people to have access to what our UN Secretary General called “transparent and reliable information,” was more important than protecting government secrets. In other words, the American people’s right to information was very, very important and the media’s role in getting that information to them had to be protected.

And we must recognize that ensuring that our information remains reliable is the responsibility of everyone, understanding that press freedom is measured in the ability of the media to gather and report that reliable information and not on the number of publications that may claim to do so.

A free press is the beating heart of any well-functioning society. It pumps blood,that is information, through the body, that is the people, who use it in making decisions about how to live their lives.