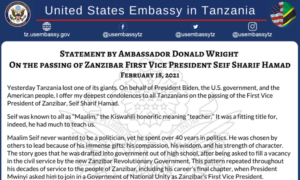 Yesterday Tanzania lost one of its giants. On behalf of President Biden, the U.S. government, and the American people, I offer my deepest condolences to all Tanzanians on the passing of the First Vice President of Zanzibar, Seif Sharif Hamad.

Seif was known to all as “Maalim,” the Kiswahili honorific meaning “teacher.” It was a fitting title for, indeed, he had much to teach us.

Maalim Seif never wanted to be a politician, yet he spent over 40 years in politics. He was chosen by others to lead because of his immense gifts: his compassion, his wisdom, and his strength of character. The story goes that he was drafted into government out of high school, after being asked to fill a vacancy in the civil service by the new Zanzibar Revolutionary Government. This pattern repeated throughout his decades of service to the people of Zanzibar, including his career’s final chapter, when President Mwinyi asked him to join in a Government of National Unity as Zanzibar’s First Vice President.

In my meetings with Maalim Seif I was struck by his quiet and calm demeanor, and by his great reservoir of strength and courage just below the surface. He repeatedly showed that courage throughout his career, sometimes working with the government, and sometimes opposing it at great personal cost.

In his final days he committed two last acts of great bravery. First, he threw his support behind Zanzibar’s Government of National Unity, joining with President Mwinyi in an effort to heal past wounds and be a leader for all Zanzibaris. Second, when he became sick with Covid-19, he informed the world of his diagnosis, demonstrating again his devotion to the health and safety of all Tanzanians.

In honor of his courage, in tribute to his memory, let us all continue on the path that he started and do our best to live up to his legacy.