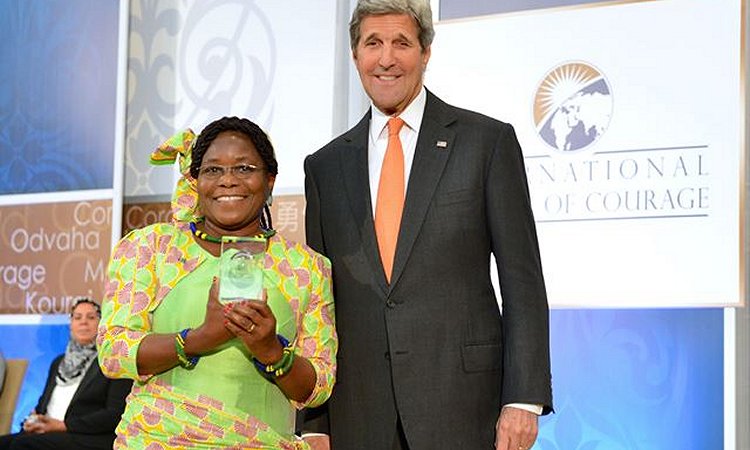 Waziri wa Mambo ya Nje wa Marekani John Kerry na Mkurugenzi Mtendaji wa Under the Same Sun Tanzania Vicky Ntetema baada ya kutunukiwa tuzo ya Wanawake Jasiri wa Kimataifa kwa mwaka 2016 huko Washington, D.C. Marekani, tarehe 29 Machi 2016.
On behalf of the American people, I would like to offer my heartfelt congratulations to Ms. Vicky Ntetema, the Executive Director of Under the Same Sun Tanzania, upon her receipt yesterday in Washington of the Department of State’s 2016 International Women of Courage Award.  We at U.S. Mission Tanzania were incredibly proud to see Ms. Ntetema stand with the thirteen other women from around the world who received the award, and especially to see them honored by Secretary of State John Kerry and Vice President Joe Biden.

I have long been aware of Ms. Ntetema’s advocacy, and when I met her last week, I was struck by her conviction as she described the challenges faced by people with albinism, and impressed by her achievements.  From her work as an undercover journalist exposing the horrific trade in the body parts of Tanzanians with albinism, to her brave advocacy for the human rights of people with albinism in Tanzania and around the world, Ms. Ntetema serves as an example to us all of how to stand with courage in the face of injustice.  We are proud to work together with Ms. Ntetema, with our committed partners in the Government of the United Republic of Tanzania, and with the people of Tanzania to ensure all its citizens, regardless of the color of their skin, enjoy the traditions of peace and security for which Tanzania is known throughout the world.