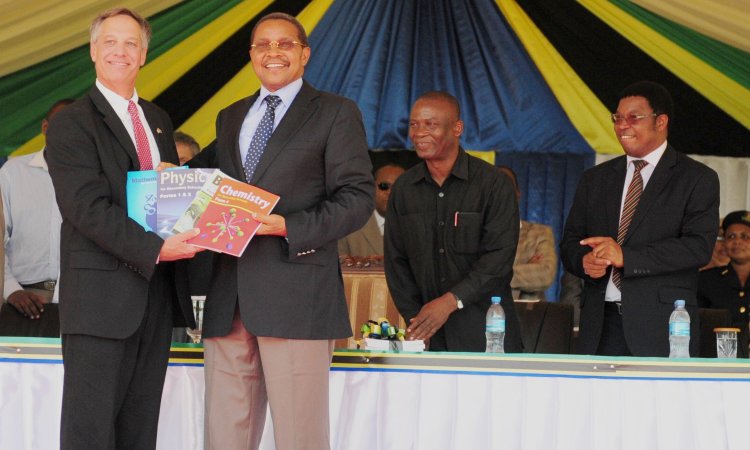 DAR ES SALAAM, TANZANIA.  President of the United Republic of Tanzania Jakaya Kikwete and U.S. Ambassador Mark B. Childress celebrated yesterday the delivery of 2.5 million secondary school textbooks to the Ministry of Education and Vocational Training (MOEVT). The textbooks were requested by President Kikwete during President Barack Obama’s June 2013 visit to Tanzania, and were provided by the United States Agency for International Development (USAID).  All of the 2.5 million textbooks, which cover the subjects of mathematics, physics, chemistry, and biology for students in Forms I-IV, were distributed to secondary schools in mainland Tanzania by the Tanzania People’s Defense Forces in January 2015.

In his initial remarks in Swahili, Ambassador Childress said “Ili kujifunza, lazima msome.  Na vitabu kama hivi ni ufunguo wa maendeleo ya siku zijazo – elimu ya sayansi na teknolojia ni msingi wa ustawi wa kiuchumi.”  Ambassador Childress went on to say in English “We just visited some of these classrooms, and it was extraordinary to see these students.  And I said Mr. President, I guarantee you — there are students in this classroom today who will become scientists, because President Kikwete visited them in their classroom with these new books – and that’s extraordinary.

The governments of Tanzania and the United States are united in the effort to provide a solid foundation of skills through quality education, not only in science, but also in reading, writing, and arithmetic. Supporting programs that increase access to education in developing countries –specifically, programs that promote education of young girls – have proven lasting economic benefits. The World Bank found in a survey of 100 countries that a one percent increase in the share of women with a secondary education boosts annual per capita income growth by 0.3 percentage points. Moreover, studies show educated women re-invest 90 percent of their income in their family.

The handover of these textbooks follows a similar initiative funded by USAID in 2008 when, through collaboration between South Carolina State University and Zanzibar’s Ministry of Education, more than one million textbooks and learning materials were produced and distributed throughout Zanzibar.

In addition to the textbooks, USAID’s education programs in Tanzania support increasing lifelong learning skills in areas of reading.  Interventions include the development and distribution of learning materials, teacher training, and providing parents and community members with the tools to help children improve their reading achievement.