Tanzania Upgraded to Tier 2 in 2022 Trafficking in Persons Report 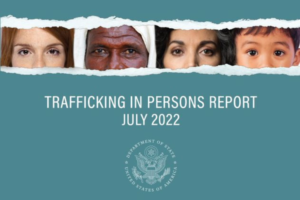 DAR ES SALAAM – Secretary of State Antony J. Blinken released the 2022 Trafficking in Persons (TIP) Country Report for the United Republic of Tanzania on July 19, 2022.  This year, Tanzania was assessed to have met the criteria for an upgrade to Tier 2, noting that the Government of Tanzania does not fully meet the minimum standards for the elimination of human trafficking but is making significant efforts to do so.

The TIP Report is the world’s most comprehensive resource of government anti-trafficking efforts – including our own – and reflects the U.S. government’s commitment to global leadership on this key human rights, rule of law, and national security issue.

The 2022 report cited several advancements made by the Tanzanian government including investigating significantly more trafficking cases, convicting more traffickers, identifying more victims, and coordinating with local and international organizations to enhance training for government officials.  In addition, the government passed its 2021-2024 National Action Plan to Combat Trafficking in Persons and made notable amendments to the 2008 Anti-Trafficking in Persons Act.  Many of these efforts were made in partnership with various civil society organizations (CSOs), including Lawyers Without Borders and the United Nations Office on Drugs and Crime through grant awards funded by the United States government.  Government partnerships with CSOs play a critical role in promoting awareness raising activities to prevent trafficking and support victims.

“We encourage the Government of Tanzania to expand on the good work undertaken over the past year,” said Ambassador Wright. “We look forward to further supporting Tanzania in its efforts to combat human trafficking on mainland Tanzania and Zanzibar.”

These efforts would include making tangible progress in the following critical areas: while respecting due process and human rights, seek significant prison terms for convicted traffickers; increase protective services for victim-witnesses participating in the criminal justice process; expand the provision of services to victims in partnership with NGOs; allocate increased financial and personnel resources for the Anti-Trafficking Committee and Anti-Trafficking Secretariat; and adopt and enforce the 2008 anti-trafficking law in Zanzibar.

The complete Trafficking in Persons report, including the Tanzania country narrative is available at: https://www.state.gov/trafficking-in-persons-report/.