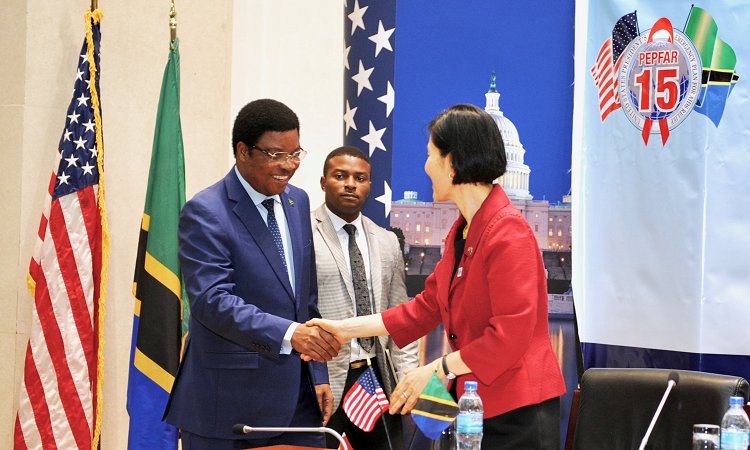 Dar es Salaam, TANZANIA. On Wednesday, May 30, Chargé d’Affaires of the Embassy of the United States of America Inmi K. Patterson and Prime Minister Honorable Kassim Majaliwa, formally launched a campaign recognizing the 15-year anniversary of the United States and Tanzania’s partnership on the U.S. President’s Emergency Plan for AIDS Relief (PEPFAR.  During a ceremony at Julius Nyerere International Convention Centre, the Chargé d’Affaires announced that PEPFAR recently passed an important milestone and now provides lifesaving treatment to more than one million Tanzanians living with HIV.  Since PEPFAR was inaugurated by President George W. Bush in 2003, the United States Government has invested more than $4.5 billion (approximately 10.26 trillion TZS) to stop the transmission of HIV/AIDS in Tanzania.

The newly launched #PEPFAR15 campaign will continue throughout 2018 to both celebrate our countries’ shared accomplishments in the fight against HIV and to take the steps necessary to control the HIV epidemic in Tanzania.  In order to control the epidemic, it is critical that all Tanzanians living with HIV get tested, learn their status, and begin lifesaving treatment.  Toward that end, the #PEPFAR15 campaign aims to reduce stigma and increase access to and use of HIV services.  Anyone who discovers they are HIV-positive can immediately begin treatment, and most people on treatment have such low levels of the virus that they are virtually unable to pass the virus to others, including sexual partners and their babies.

“During this campaign, we will work with you all and with people living with HIV across Tanzania to tell positive stories: stories of people living with HIV who were once weak and sick but who are now strong and healthy, stories of people who got tested early and began treatment before ever feeling sick, stories of HIV-positive people who have taken lifesaving medication to protect their spouses, and stories of HIV-positive mothers who have taken lifesaving medication to protect their babies,” said Chargé d’Affaires Inmi Patterson.

For more information on PEPFAR in Tanzania please visit the U.S. Embassy’s website at https://tz.usembassy.gov/our-relationship/pepfar/.

Summary: PEPFAR is the U.S. Government initiative to help save the lives of those with HIV/AIDS around the world.  This historic commitment is the largest by any nation to combat a single disease internationally.  PEPFAR is driven by a shared responsibility among donor and partner nations and others to save lives.

Through PEPFAR, the U.S. has supported a world that is safer and more secure from infectious disease threats.  Originally designed to deliver lifesaving services in countries hardest hit by HIV/AIDS, PEPFAR is now aims to control the global spread of HIV/AIDS.  It combines U.S. government engagement in health, development, security, and diplomacy, unparalleled in its capacity to deliver clear, measurable, and transformative results and impact.

Program background and statistics on the impact of the program:

PEPFAR’s 15-year commitment to Tanzanians reflects the enduring value of our relationship with the Tanzanian people: