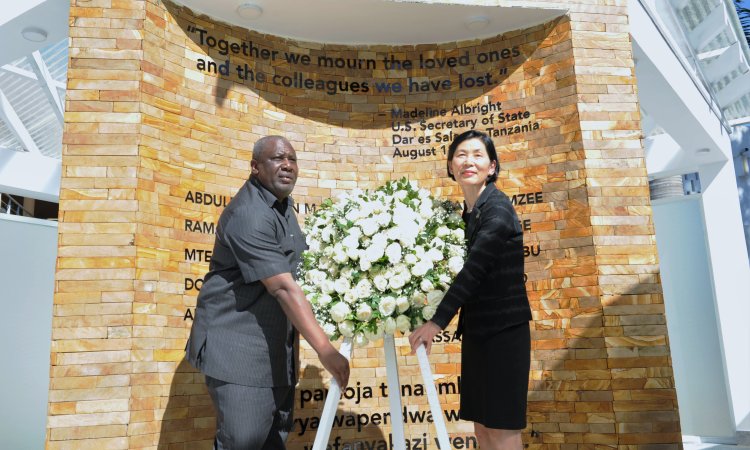 Dar es Salaam, TANZANIA. On Tuesday, August 7, the U.S. Embassy and the National Museum of Tanzania hosted a 20th anniversary commemoration program to honor victims of the August 7, 1998 attacks against Embassies Dar es Salaam and Nairobi. At the conclusion of the program, family members of the deceased and survivors joined United States Embassy Chargé d’Affaires Dr. Inmi K. Patterson and Minister for Home Affairs Hon. Kangi Lugola as they placed a memorial wreath in the newly erected “Hope out of Sorrow” memorial at the National Museum of Tanzania. The newly dedicated memorial results from ongoing educational and cultural cooperation between the U.S. Government of the Government of Tanzania.

Speaking about the tragic events and the memorial, Charge Patterson said, “A savage, desperate attempt to drive a wedge between Tanzanians and Americans, between the Tanzanian government and the American government, between peoples of different faiths, instead revealed and reinforced a bond. People of all faiths joined in condemning the violence and in praying as one for its victims. We consecrate this memorial in sorrow to the memory of those who were taken from us. We offer it in empathy for those whose lives have been forever changed. And through it, we recall the valor, the selflessness, and the generosity, which were so in evidence that day and which have brought our two peoples, our two nations, even closer together.”