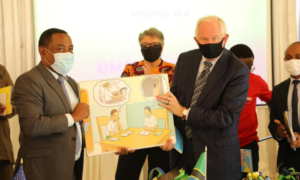 Arusha, Tanzania – On December 07, the United States Government, through the U.S. Agency for International Development (USAID), celebrated advancements to youth and girls’ education made through five years of the Waache Wasome (“Let Them Learn”) activity.

The event celebrated and highlighted the successes and sustainability of the U.S. Government investments in the Waache Wasome youth activity in promoting staff, students as well as the important role of girls’ empowerment in advancing Tanzania’s development.

Waache Wasome is a five-year (December 2016-February 2022), $14.75 million activity funded by USAID. The activity has increased adolescent girls’ enrollment and retention in both formal secondary school and alternative education pathways. This model has empowered adolescent girls to create and achieve goals for their future while addressing social norms and economic barriers that has constrained their ability to remain and excel in school.

Waache Wasome’s School-Related Gender-Based Violence (SRGBV) prevention manual and Protect Our Youth peer training manual will be rolled out by the government of Tanzania for nationwide use. This is a significant milestone for the project’s training materials to be adopted by the government for use in all schools. The President’s Office – Regional Administration and Local Government (PORALG) has also officially adopted and integrated the Dropout Early Warning System (DEWS) module into its School Information System. All basic education schools, including private and government schools, will use DEWS to track and support students at risk of dropping out.

Speaking at the event, the United States Ambassador to Tanzania Dr. Donald Wright praised the Waache Wasome program for its accomplishments, and noted that eliminating barriers to girl’s education has many positive ripple effects in society. “By addressing the constraints Tanzanian girls face while in school and in their communities, they are more likely to complete their education. This leads to better health for them and their children, increased employment opportunities, higher incomes, and a reduction in poverty for their households and communities.

Ambassador Wright also commended the Government of Tanzania for its recent policy change allowing pregnant schoolgirls to continue with formal education. “This proclamation indicates a more inclusive approach to education in Tanzania and a positive step forward for Tanzanians,” he said.