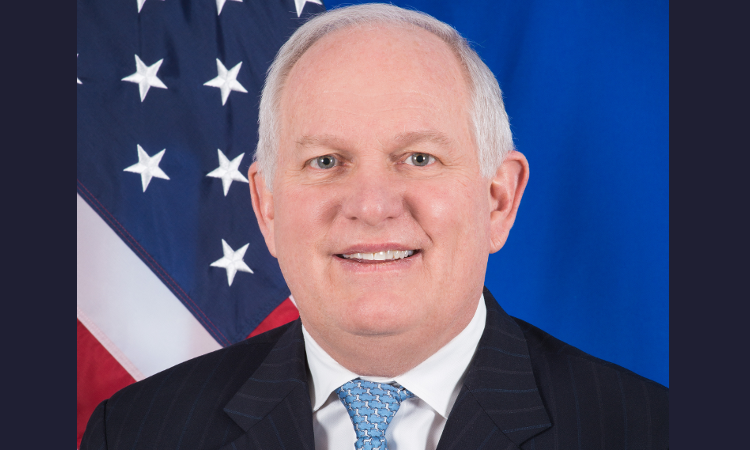 I first visited Tanzania over 30 years ago to serve as a volunteer physician at a public hospital in Zanzibar. During that memorable summer, I treated children with malnutrition, malaria, parasites, and tuberculosis. I also developed a deep admiration for the Tanzanian people; they were warm, generous, and treated strangers like family. In the years that followed, I worked as a physician in Texas and then as a civil servant in Washington, ultimately leading the Office of Disease Prevention and Health Promotion for almost eight years. I never dreamed that my life would bring me back full circle to where it all began. Today, it is my honor to represent my country as the U.S. Ambassador to Tanzania. My experiences in Zanzibar as a young man had a great impact on my life. Returning now as the U.S. Ambassador, I am determined to continue strengthening the bonds between the people of Tanzania and the United States in order to bring greater peace and prosperity for both our countries.

In this spirit, I seek to foster a new era of engagement between our two countries and a partnership that will extend directly to the Tanzanian people. I look forward to visiting Tanzania’s diverse cities, towns, and villages, from Kagera to Mtwara and from Kigoma to the Zanzibar Isles. I want to hear from members of the Tanzanian and American business communities, universities, and organizations about their ideas for how to expand these efforts and create new avenues for partnership that will build the next generation of leaders and create a brighter future for all Tanzanians. Since my swearing-in, I have been immersed in dozens of briefings and consultations with myriad U.S. government agencies, and multilateral and civic organizations in Washington DC. In each of these meetings, the common thread was the enormous interest, support, and enthusiasm for Tanzania’s future and for our bilateral relationship. As ambassador, my top priorities will be improving health outcomes, boosting economic growth, and investing in young people. Ensuring the safety and security of American citizens and U.S. Embassy staff is a top priority.

The United States has provided more than $7.5 billion total in assistance to Tanzania over the past 20 years, with nearly $4.9 billion spent to improve the health of the Tanzanian people. As a doctor, I know how important these efforts are. I am committed to ensuring that the United States’ partnership remains strong. This year alone, American taxpayer support will provide $5.6 million to combat COVID-19 in Tanzania. That amounts to 12.9 billion shillings.

Tanzania’s challenging business environment presents both a climate of hope and hesitancy. There is hope because we all know that Tanzania is a country of unbeatable potential. At the same time, there is hesitancy on the part of prospective investors because of opaque and unpredictable policy shifts; contract law uncertainty; aggressive revenue collection tactics; unreliable and costly energy; weak infrastructure; and limited access to land.

The public and private sectors must partner with each other and trust each other if broad, inclusive, and sustainable economic growth is to occur.  Through increased private sector investment, Tanzania can address critical infrastructure demands such as affordable energy for all and public transportation networks, while simultaneously developing the local human capital necessary to build on Tanzania’s recent entry into lower-middle income status and bring even more people out of poverty.

U.S. businesses throughout the world have exemplified corruption-free practices, compliance with local regulations and corporate social responsibility. I am eager to work with the Tanzanian government to strengthen ties between U.S. companies and Tanzania as we explore opportunities and expand markets to the benefit of all. By expanding our business partnerships and working together, we can make the United States Tanzania’s premier trade and investment partner.

One of the driving engines of Tanzania is its youth. I believe strongly in the role that youth can and must play in leading the way to a more prosperous future. Through our many professional, cultural, and educational exchange programs, and the transformative initiatives participants implement in their communities upon their return to Tanzania, the United States continues to strengthen and empower Tanzania’s next generation of civic, government, and business leaders.

Efforts to uphold the rule of law and strengthen democratic institutions undergird all these efforts. Our two constitutions acknowledge the vital role of citizen democracy with their opening words: “We the People,” “Sisi Wananchi.” This is one of the fundamental shared values that unite our nations. Yet, increasingly, restrictive democratic spaces and erosions of democratic norms have constrained Tanzanian citizens’ universal rights and personal liberties, such as freedom of expression and assembly. I am committed to working with the host government, like-minded diplomatic missions, civil society, and international organizations to reverse this worrisome trend. I look forward to the realization of President Magufuli’s January 21 assurances that the October 2020 elections will be free, fair, and transparent, and his invitation to international election observers.  We welcome an election where all citizens and candidates from all parties are able to gather peacefully, express their opinions, and campaign on an equal basis.

This is an exciting time and a unique opportunity – this next phase in our relationship is one that I am proud to be leading. I wish to echo the sentiments of the sixth president of the United States John Adams, when he was appointed our first ambassador to Great Britain. To paraphrase, he noted: I shall esteem myself the happiest of people if I can be instrumental in restoring confidence and affection between our nations. I can think of no greater goal, or greater honor. Working together, the United States and Tanzania can strengthen our economies, make our citizens’ lives healthier, and shape the leaders of tomorrow. Kwa Pamoja Tutasonga Mbele!/ (Together we will forge ahead!)