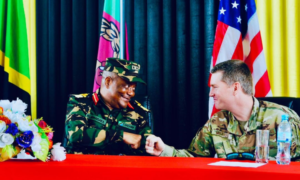 Rear Admiral Ramson Godwin Mwaisaka, Commander of the Tanzanian Navy, presided over the closing ceremony at the Peacekeeping Operations Training Center in Kunduchi. He was joined by Lieutenant Colonel Serge Mettes, Senior Defense Official at the U.S. Embassy, and members of U.S. Special Operations Command Africa.

“Tanzania is a leader in ensuring peace and stability in the region, and we are grateful to have such a strong partnership on security issues. Our defense forces have a long history of working side by side and this training was designed to improve inter-operability and make them even more cohesive,” Mettes said.

The JCET paired U.S. Special Forces Soldiers and members of Tanzania’s Marine Special Forces in eight weeks of side-by-side training to strengthen skills such as small unit tactics, marksmanship, medical treatment, unit maneuver, the Law of Armed Conflict, and the preservation of human rights in combat.

This was the second training exercise between Tanzanian and U.S. defense forces within the past nine months. According to U.S. Ambassador to Tanzania Ambassador Wright, the increased frequency of the exercises is evidence of the importance that the U.S. places on its strong security cooperation with Tanzania.

“Security cooperation is a pillar of the U.S.-Tanzania bilateral relationship. Our 60-year partnership is based on shared values and mutual respect, and it continues to grow stronger every day,” Wright said.