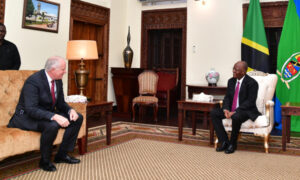 Ambassador Wright reaffirmed to President Magufuli the strength of the U.S.-Tanzania partnership, stating “I look forward to working to strengthen our bilateral relationship on health, security, governance, and education.”

Prior to being named Ambassador to Tanzania, Ambassador Wright served as the acting Secretary of the Department of Health and Human Services (HHS), the U.S. Government’s principal health agency. He also directed the Office of Disease Prevention and Health Promotion (ODPHP), the Office of Research Integrity (ORI) and the Office of Occupational Medicine (OSHA). In addition, he served as the Executive Director of the President’s Council on Sports, Fitness and Nutrition (PCSFN.)

Prior to entering government service, Dr. Wright spent nearly two decades as practicing physician in his home state of Texas, focusing on family medicine and occupational health. He is joined in Tanzania by his wife Kathy.

You can follow Ambassador Wright’s introduction to Tanzania by following the embassy’s twitter feed at @USEmbassyTZ, or on our Facebook page at https://www.facebook.com/usembassytz . A full link to his biography is available at https://tz.usembassy.gov/our-relationship/our-ambassador/