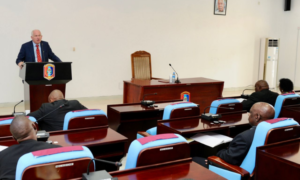 Ambassador Wright was invited to deliver the lecture by the Commandant of the College, Major General Ibrahim Mhona.

In his presentation Ambassador Wright highlighted the strength of the 60-year partnership between the U.S. and Tanzania, which has brought numerous benefits for both countries. He summarized the pillars of the U.S.-Tanzania relationship as shared commitments to improving health and education; boosting economic growth and trade; strengthening democracy; and advancing greater peace and security.

“In each of these areas, our partnership is having a positive impact on the lives of ordinary Tanzanians while strengthening and reinforcing the bond between our countries,” he said.

Addressing the key issue of security cooperation, Ambassador Wright stressed the vital role Tanzania plays in helping to ensure peace and security in the region.

“Tanzania is a key U.S. partner for promoting peace and regional stability in East Africa,” he said.

The National Defense College routinely invites diplomats to deliver guest lectures to students in its Security and Strategic Studies Course, as part of its mission to equip defense and government policy makers with national security and international relations knowledge.