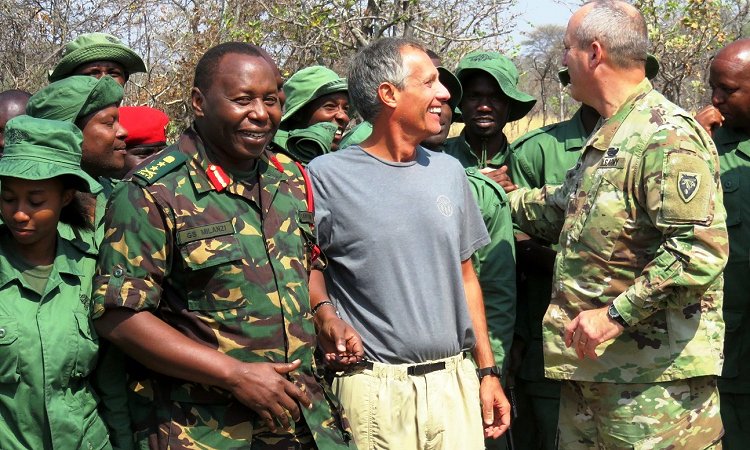 This training program was initiated after Ambassador Childress visited Rungwa Park in 2015.  Seeing the need for capacity building and improved infrastructure to stop the alarming rates of poaching in the Game Reserve, the Ambassador pledged to take quick action and, within a year, marshalled support from a variety of partners to assist the game scouts. He highlighted that an infusion of support from The Wyss Foundation provided equipment and light gear to game scouts at a post that had been taken over by poachers, enabling the game scouts to patrol this post during the rainy season for the first time in more than a decade. At the event on Wednesday, the Ambassador remarked, “This program highlights the strong collaboration that the United States has with Tanzania and is a model of what can be achieved when we all work together:  government, security forces, the international community, NGOs, the private sector, and Tanzanian citizens across the country.”

This program is one part of a major effort by the U.S. Government and other partners to protect the elephant and wildlife corridor between Rungwa and Katavi, thus conserving a critical link between the Ruaha-Rungwa and Katavi ecosystems. The U.S. Agency for International Development (USAID), in partnership with WCS, is supporting the $8.5-million five-year Southern Highlands and Ruaha-Katavi Protection Program (SHARPP).  SHARPP is focused on four key areas: wildlife management areas (WMAs); livelihoods; habitat management; and elephant monitoring and protection.  In addition to this capacity training for the game scouts in Rungwa, WCS, with support from both USAID and private funds, has also conducted training with Tanzanian game scouts on crime scene management, the Spatial Monitoring and Reporting Tool (SMART), and rapid reaction.

More information about the Ruaha-Rungwa and Katavi ecosystems is available here: