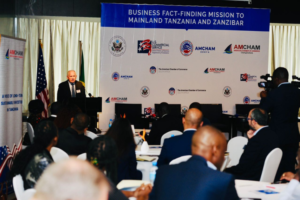 At the opening of the event, Ambassador Wright congratulated the firms for their decision to examine Tanzania as a place to consider investing in key sectors of the economy and expanding their business.  “We welcome more American involvement in the Tanzanian economy – in fact, it is one of our Mission’s primary goals.  U.S. firms bring ingenuity, know-how, and capital, but also a desire to train Tanzanians to manage and run their local operations.  The jobs they develop in Tanzania are not just line-level employees, but highly skilled technology and management professionals,” said Ambassador Wright.

Deputy Minister Kigahe noted; “The United States of America and the United Republic of Tanzania enjoys cordial relationship since 1961 characterized by mutual respect, shared values and aspirations for a more peaceful and prosperous future. The U.S is Tanzania’s third largest bilateral investor in Tanzania and has provided development and other assistance for capacity-building to address health and education issues, promote broad-based economic growth and advance regional and domestic security to sustain progress.” 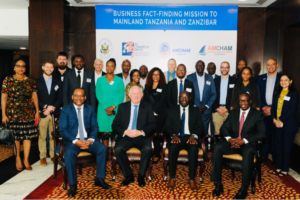 Tomorrow, September 28, the mission will travel to Zanzibar for briefings by government representatives, a discussion with the Zanzibar Investment Promotion Authority, and keynote remarks from First Vice President the Honorable Othman Masoud Othman.