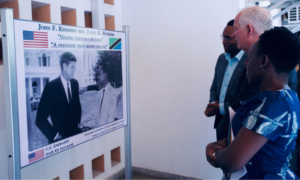 Dar es Salaam – As Tanzania commemorates the centennial of Mwalimu Julius Nyerere’s birth this week, the U.S. Embassy marked the occasion today by donating a historical exhibit to the National Museum and House of Culture examining the friendship between Nyerere and the 35th President of the United States, John F. Kennedy.

The exhibit was officially launched during a ceremony this morning attended by the Museum’s Director General, Dr. Noel Lwoga, and U.S. Ambassador to Tanzania DR. Donald Wright.

The exhibit, officially titled: “Julius Nyerere and John F. Kennedy: A Friendship that Shaped History,” displays photos, documents, and correspondence between the two leaders. It describes how the admiration the two leaders felt for each other translated into strong bilateral relations between the U.S. and Tanzania which have endured for over sixty years.

Ambassador Wright also used the occasion to pay tribute to the life and legacy of Mwalimu Nyerere, who would have turned 100 this year.

“I join with all Tanzanians and people around the world in paying tribute to Nyerere’s leadership during a lifetime spent in the public eye: As a young crusader for independence from colonialism; as Tanzania’s founding father and president for over two decades before willingly stepping down; as the force behind the scenes stewarding the country into a new era of multi-party democracy and economic liberalism; and as an elder statesman and promoter of peace and stability around the region,” he said.

The exhibit is free and open to the public.