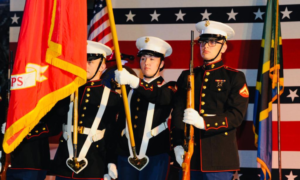 The U.S. Embassy in Tanzania commemorated the 246th anniversary of American independence with a celebration at the home of U.S. Ambassador to Tanzania Dr. Donald Wright on June 14. The event was also an opportunity to highlight the strength of the U.S. partnership with the people and government of Tanzania, represented by Guest of Honor Minister Nape Nnauye, Minister for Information, Communications, and Information Technology.

Ambassador Wright used his remarks during the celebration to highlight the many milestones that occurred within the past year in the framework of the U.S.-Tanzania partnership, most notably the visit by Tanzanian President Samia Suluhu Hassan to the U.S. in April 2022 during which she visited the White House and met with Vice President Kamala Harris.

Ambassador Wright also described the advances made in key areas of the U.S.-Tanzania partnership, including health, education, security, trade, and strengthening democracy. In the health sector, he highlighted several notable achievements that took place in the past year. These included the launch of Afya Yangu, a USAID initiative that will invest $250 million over 5 years to improve the health of Tanzanians, especially women, children, and the most vulnerable, and the kick-off of the Global Vax program, a $25 million initiative that will accelerate the pace of vaccination against COVID-19 in Tanzania.

The celebration was made extra special by the presence of some noteworthy guests. Among them was Ashley Collins, a well-known American artist whose work is displayed in the Ambassador’s residence. Collins is in Tanzania to work with local artists on an exhibition.

Other special guests included the members of the U.S. Air Force Woodwinds Quintet known as “Winds Aloft” who traveled all the way from Germany to perform.

The event was attended by hundreds of friends and partners and ended with a massive fireworks show over the waters of nearby Coco Beach.