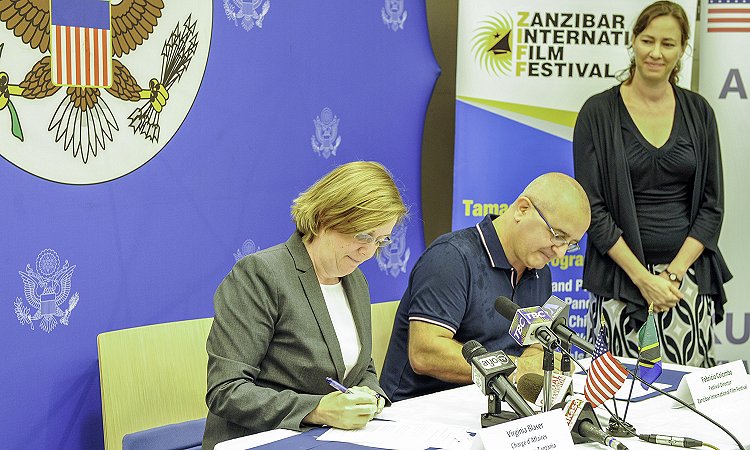 Signing of a Memorandum of Understanding (MOU) between the Zanzibar International Film Festival (ZIFF) and the U.S. Embassy to facilitate the participation of two American film experts in ZIFF this July, 2017.

Judd Ehrlich is the director of the documentary Keepers of the Game, which follows a team of Native American girls as they seek to win a regional championship in the sport of lacrosse, traditionally reserved for men and boys.  Debra Zimmerman is a film expert and the Executive Director of Women Make Movies, an organization dedicated to increasing access and opportunities for female filmmakers.

Through the partnership with ZIFF, Ehrlich and Zimmerman will work directly with emerging Zanzibari filmmakers during the 20th annual film festival in Zanzibar.  They will conduct a series of workshops on documentary filmmaking, and the marketing and distribution of films, as well as hold a workshop specifically for women in the film industry.

Speaking at the MOU signing event, Chargé Blaser said, “We are pleased to build on our ongoing support for the Zanzibari people through this cultural exchange program.  Together we will provide an opportunity for American and Zanzibari filmmakers to exchange ideas and discuss the craft of filmmaking and its use as a vehicle for addressing a variety of issues that affect society.”