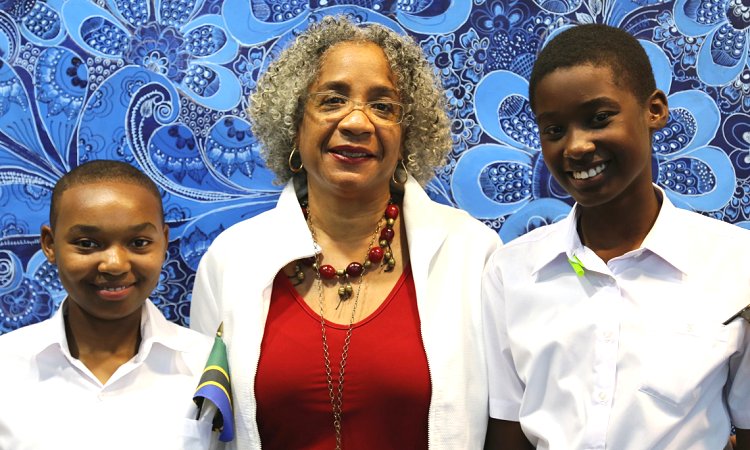 The U.S. Agency for International Development (USAID) announced today a new program in Tanzania that will increase access to and quality of education for adolescent girls. This announcement follows an October 11 event at the U.S. Embassy celebrating International Day of the Girl, where 50 Tanzanian girls joined First Lady of the United States Michelle Obama for an online discussion of girls’ education. The new program in Tanzania is part of the Let Girls Learn initiative, launched in 2015 by U.S. President Barack Obama and Mrs. Obama to address a range of challenges preventing adolescent girls from attaining a quality education that empowers them to reach their full potential.

Concurrently, the USAID Mission in Tanzania announced that it will sign a Memorandum of Cooperation on the Let Girls Learn initiative with Global Affairs Canada (GAC). This agreement builds on USAID and GAC’s existing collaboration through the Education Development Partner Group, which coordinates with the Government of Tanzania’s Ministry of Education, Science, and Technology to develop the Education Sector Development Plan and education policies. The new agreement commits both donor agencies to work together to identify and outline potential areas for joint cooperation to advance access to quality education, foster an enabling environment for adolescent girls’ education, and engage and equip girls to be agents of change.

In Tanzania, World Education is the apparent awardee for the Waache Wasome (“Let Them Learn”) program, which will capitalize on long-standing USAID efforts to empower young women. In partnership with Restless Development, WGBH Educational Foundation, and

Campaign for Female Education, Waache Wasome will increase enrollment and retention of adolescent girls aged 13-19 and improve community perceptions about the value of educating girls in select districts of Arusha and Mara regions. This new activity grew out of a USAID workshop held in Dar es Salaam in May, where development experts, donors, and Tanzanian and Malawian government officials co-designed innovative solutions to help adolescent girls attain a high-quality education.

“USAID Tanzania is proud to be part of Let Girls Learn, which complements our strategy to advance Tanzania’s socio-economic status in large part by empowering women and youth,” said USAID Mission Director Sharon Cromer. “We are committed to improving the lifelong learning skills of Tanzanians, particularly among vulnerable groups like adolescent girls who face many barriers to education.”

While primary school enrollment among girls and boys is nearly equivalent in Tanzania, obstacles such as early marriage still impede girls’ access to education. Less than 20 percent of women age 20-24 have completed secondary school and 20 percent have had no education at all. The new Let Girls Learn program in Tanzania will take a “whole-of-girl” approach to reducing barriers to girls’ enrollment and retention in school while addressing obstacles in the home, school, and community and expanding links between the education, health, and social welfare sectors. By engaging whole communities including parents, men, teachers, and boys, the program aims to transform gender norms and increase the value that communities and families place on girls’ education. Let Girls Learn programs also aim to empower girls, as well as reduce child marriages and teen pregnancy.

The new Memorandum of Cooperation between the United States and Canada on Let Girls Learn activities in Tanzania aims to maximize the impact of both countries’ individual development assistance and support for education. The agreement signals a deepened commitment to promote educational access in line with Government of Tanzania’s own priorities for the education sector.

“Canada is pleased to work with USAID in Tanzania to improve access to education for adolescent girls, to address barriers to girls’ education, and to empower girls to be leaders,” said Ian Myles, High Commissioner for Canada. “Canada’s current support is focused on improving the quality of education in primary and secondary schools through better teacher education. Canada will work with the U.S. Government to ensure that issues affecting adolescent girls are raised in policy dialogue with the Government of Tanzania.”