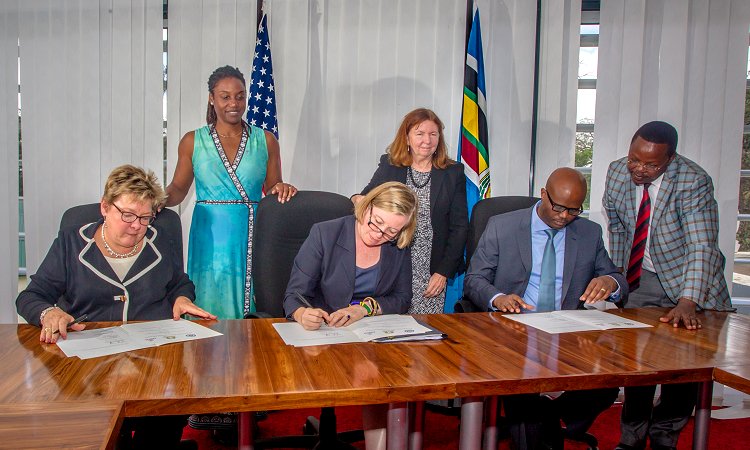 Arusha, TANZANIA. Today, the U.S. Government and the East African Community (EAC) launched a Regional Development Objectives Grant Agreement at the EAC headquarters in Arusha, Tanzania. On behalf of the U.S. Government, the United States Agency for International Development (USAID) will contribute approximately $194 million over a five year period to shared development goals, deepening the partnership between the two organizations.

About $30 million will directly support the EAC Secretariat, while the remainder will fund other regional actors in their efforts to advance the EAC regional integration agenda.

Chargé d’Affaires of the U.S. Embassy to Tanzania and the EAC Virginia Blaser, USAID Mission Director for Kenya and East Africa Karen Freeman, and EAC Secretary General Ambassador Liberát Mfumukeko signed a memorandum of acknowledgment to affirm the agreement.

Chargé Blaser noted the tremendous value of fostering regional cooperation, saying that the United States supports “governments and regional bodies such as the EAC in their collaborative efforts to unlock this region’s full potential for the benefit of its people.”

USAID Mission Director Freeman emphasized the joint achievements of the EAC and USAID over the past two decades. “By simplifying customs and border procedures, we have facilitated faster, more affordable and predictable trade. We have increased investment by facilitating the closure of more international deals, which are expanding local industries and manufacturing.”

Under this agreement, the EAC and the United States will work together to (i) advance regional economic integration, (ii) increase trade and investment between member states and with the United States, (iii) improve the sustainable management of natural resources in the Lake Victoria Basin and Mara River ecosystems, (iv) improve access to integrated health services in border areas and (iv) strengthen the EAC’s organizational leadership.