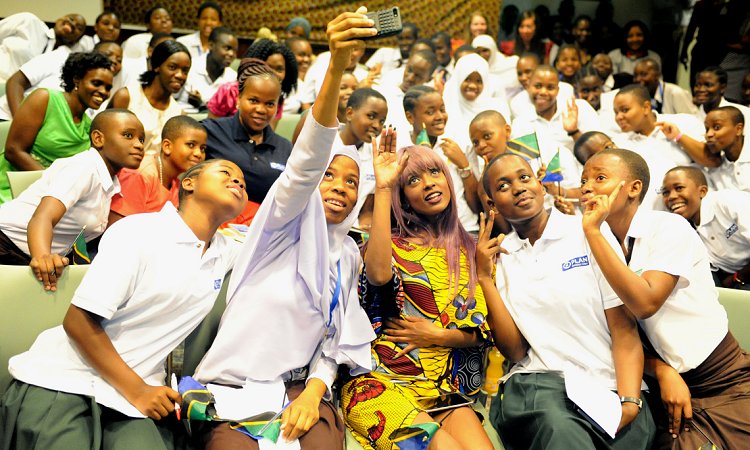 In celebration of International Day of the Girl on October 11, and in partnership with Plan International, U.S. Government representatives in Dar es Salaam joined First Lady of the United States Michelle Obama, Tanzanian music star Vanessa Mdee, and 50 Tanzanian adolescent girls in a digital global conversation about the importance of girls’ education.

First Lady Michelle Obama headlined “A Brighter Future: A Global Conversation on Girls’ Education,” a real-time online conversation with adolescent girls around the world hosted by Glamour magazine’s The Girl Project. Participating in the conversation live from Washington, D.C., Mrs. Obama was joined by actress and activist Yara Shahidi, as well as Glamour Editor-in-Chief Cindi Leive. Speaking via video-chat, girls from Tanzania, Jordan, Peru, the United Kingdom, and the United States discussed the challenges they face and hope to overcome in attaining a high-quality education. Other celebrities from all five countries also joined the conversation, including songstress Vanessa Mdee, who facilitated a question-and-answer session between the Tanzanian participants and girls from other countries.

“Girls in Tanzania deserve every opportunity to reach their full potential,” Mdee said. “I’m passionate about supporting their education and I’m so glad to be part of this event to highlight what Tanzania and other countries can do to prepare them to succeed in school and beyond.”

Tanzania is one of the first two priority countries under the Let Girls Learn initiative, launched in 2015 by U.S. President Barack Obama and First Lady Michelle Obama to address a range of challenges preventing adolescent girls from attaining a quality education that empowers them to reach their full potential.

Welcoming Tanzanian participants to the event at the U.S. Embassy, U.S. Agency for International Development Tanzania Mission Director Sharon Cromer emphasized the importance of ensuring every Tanzanian girl gets a good education.

“Women and youth are at the center of our efforts to help Tanzania become stronger, more prosperous, and more inclusive,” Cromer said. “We must unlock the potential of young women like those here today if we are to improve Tanzania’s socio-economic status and build opportunity for all Tanzanians.”