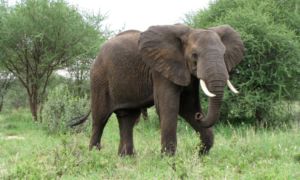 Over the last few decades, Tanzania has lost at least one-third of its ecosystems and seen its number of threatened species triple. In addition, approximately 25% of the country’s foreign income comes directly from tourism—the majority of which is wildlife-based. At the current rate of species decline, the impact on economic stability is expected to be significant.

Over the next five years, USAID Tuhifadhi Maliasili will work with the Government of Tanzania, local communities, and the private sector to address these challenges. Tuhifadhi Maliasili intends to create an environment wherein movement corridors will improve quality of life for not only wildlife but also the surrounding communities.

“At the current rate of species decline, Tanzania is on track to lose a significant amount of tourism, which would have major economic ramifications,” said Kate Somvongsiri, USAID Tanzania Mission Director. “Although we cannot reverse previous damage to wildlife and natural resources, moving forward, USAID Tuhifadhi Maliasili will foster sustainable management at the community and national level.”

To leverage its impact, Tuhifadhi Maliasili will engage and empower women and youth at the local and national levels, encouraging them to participate in decision making processes, assume leadership roles and take ownership over surrounding natural resources.

Commenting on the event, Ms. Somvongsiri remarked, “In the spirit of the 2021 United Nations Climate Change Conference, I’d like to take this opportunity to highlight that the world faces a profound climate crisis. Climate change is not just an existential threat, it is currently threatening development progress and exacerbating global inequities; increasing water and food scarcity, the need for humanitarian assistance, and displacement; and contributing to conflict. Activities like Tuhifadhi Maliasili are essential in preventing the worst-case climate scenarios.”