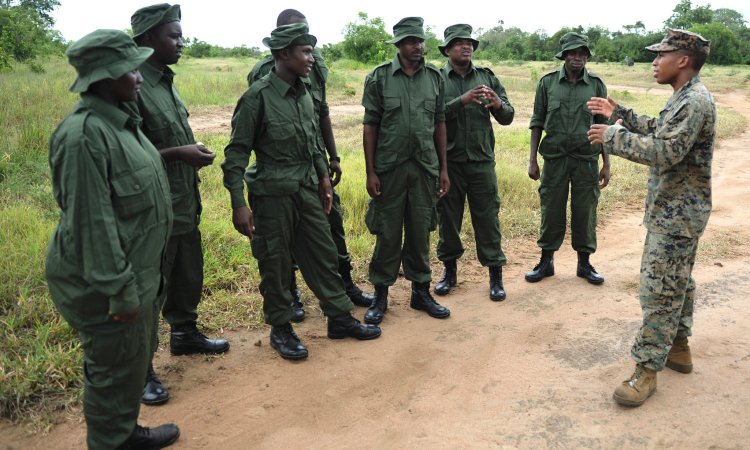 A U.S. Marine training Selous Park Rangers on patrolling techniques. The training is being conducted by U.S. Marines and Sailors from March 2-27 in the Selous Game Reserve. (Photo: U.S. Embassy, Dar es Salaam)

Selous Game Reserve, TANZANIA.  Ambassador Mark Childress observed on Monday a training of 50 Park Rangers by a team of U.S. Marines and Sailors.  This month long training is aimed at helping the Rangers combat illicit trafficking across the reserve.  The Marines and Sailors are from Special-Purpose Marine Air-Ground Task Force Crisis Response-Africa and are helping to develop small unit tactics, patrolling techniques, night operations, and logistical capabilities to increase the Rangers’ effectiveness within the game reserve.

During the visit on Monday, the Ambassador observed classroom instruction and field training focused on patrolling techniques.  At the event, the Ambassador highlighted the exceptional reputation of the U.S. Marines in the United States and their effective collaboration with the Tanzanian Park Rangers.  He remarked that the training was progressing well, and reiterated continued U.S. support for the Rangers’ efforts to stop illicit traffickers.

The Marines will return to Tanzania for follow up training programs later this year.  In addition to military training, the U.S. Government is providing training on such topics as anti-money laundering and more effective prosecution of poachers and illicit traffickers.  In January, the United States and Germany handed over a significant amount of field equipment for use by the game wardens patrolling the reserve. The equipment included small and large tents, torches, maps, binoculars, cameras, uniforms and boots.  These efforts are part of a larger Tanzania-wide wildlife conservation program worth $40 million over the next four years that will complement parallel efforts among international partners such as the Paul Allen Foundation, which is funding a new VHF system to allow game scouts to communicate across secure channels.