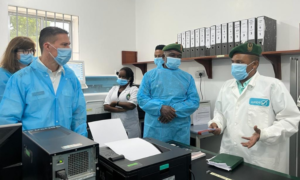 Dar es Salaam, Tanzania – This past week the Commander of the Walter Reed Army Institute of Research (WRAIR), Colonel Chad Koenig, visited several health facilities and diagnostic and research laboratories across Tanzania. WRAIR, also known as Walter Reed, is a U.S. government agency working within the Department of Defense, that has been operating in Tanzania since 1999. Walter Reed’s main objective in Tanzania is ending the HIV epidemic through research and the implementation of PEPFAR prevention, care, and treatment programs. This visit was Commander Koenig’s first time in Tanzania, and the Colonel spoke very highly of the quality of health facilities and care that patient were receiving saying, “I am quite impressed with the level of care you are able to provide, even in the more remote regions of Tanzania.”

Commander Koenig and his delegation, which included Walter Reed Chief Science Officer Dr. Karen Peterson, and Director of the United States Army Medical Research Directorate- Africa, Colonel Shannon Lacy, focused much of their visit on Walter Reed’s research programs in Tanzania. Visiting with partners from PharmAccess International in Dar es Salaam, who run Walter Reed’s Global Emerging Infectious Diseases Program, Dr. Peterson pledged to continue U.S. support for this program. She stated, “[I] am glad to hear that we have a proposal to continue this important work and move it forward. We will continue to follow up on this project and see that it moves ahead.”

The team also visited the Mbeya Zonal Referral Hospital in the Southern Highlands to observe Walter Reed supported research facilities including the National Institute of Medical Research- Mbeya Medical Research Center, and laboratories run by the Ministry of Health in collaboration with HJFMRI. These facilities included TB diagnostic laboratories, HIV vaccine trial clinics, HIV viral load and sequencing facilities, COVID-19 diagnostic and sequencing laboratories, and a long-term research study that has tracked HIV patients across Africa since 2008 with the intent to inform and shape government policy and programming. Speaking of this 20+ year collaborative relationship Colonel Koenig said, “We are hopeful that through our support for research in Tanzania, we will be able to put this country in a strengthened position to be able to fight not only HIV, but future epidemics as well.”

The team concluded their trip with a visit to Lugalo General Military Hospital where they met with representatives from the Tanzania People’s Defense Forces (TPDF) Chief of Medical Services and the Lugalo General Officer Commanding, Brigadier General Dr. Agatha Katua. The U.S. government, through Walter Reed, has been supporting HIV/AIDS prevention, care, and treatment programs for the TPDF since 2006 and currently supports 21 different TPDF hospitals and clinics throughout Tanzania. At each of these military facilities, military members, their families, and local civilian populations are offered HIV counseling, testing, prevention strategies, anti-retroviral therapy, prevention of mother-to-child transmission, as well as programs to support orphans and vulnerable children.