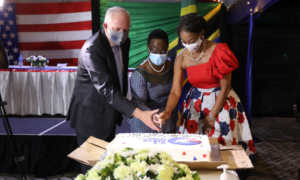 Dar es Salaam – The U.S. Peace Corps celebrated the 60th anniversary of the of the arrival of the first Peace Corps Volunteers in Tanzania with a reception yesterday evening attended by guest of honor H.E. Liberata Mulamula, Minister of Foreign Affairs & East African Cooperation.

In her remarks, Minister Mulamula noted that the 60th anniversary of the arrival of the first Peace Corps Volunteers is a landmark moment in the cooperation between the governments and peoples of the United States and Tanzania.

“Today’s anniversary testifies another milestone in the cherished bilateral historical friendship between our countries,” Mulamula said.

U.S. President John F. Kennedy created the Peace Corps in 1961, challenging young Americans to serve humanity by working for peace and development in countries around the world. Because of the close friendship between Kennedy and Tanzania’s founding father Mwalimu Julius Nyerere, Tanzania (then called Tanganyika) was selected as one of the first countries in the world to receive Peace Corps Volunteers. On September 29, 1961, 50 Peace Corps Volunteers landed in Arusha, Tanzania.

ince then, approximately 3,200 Peace Corps Volunteers have worked alongside Tanzanians in 22 regions of the country to develop community-led solutions to address challenges in education, health, agriculture, the environment and youth development.

According to Minister Mulamula, these volunteers have had a positive impact on Tanzania’s development.

“We are thankful for the Americans that have worked tirelessly with local partners across the most remote reaches of our country as math and science teachers in secondary schools, teacher trainers in information and communication technology, leaders of health education projects that increase basic health knowledge, and leaders of environmental projects addressing basic village-level needs for sustaining natural resources. Thanks to our visionary leaders Mwalimu Nyerere and U.S president John F. Kennedy for making this program possible,” Mulamula said. 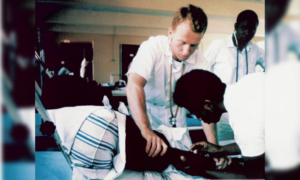 In his remarks, U.S. Ambassador to Tanzania Donald Wright stressed that Peace Corps Volunteers who serve in Tanzania are positively changed by the experience.

“After two years of working side-by-side with Tanzanian counterparts, sharing meals, laughter, and learning about one another’s cultures, the Volunteers are forever changed, and they carry Tanzania in their hearts wherever they go,” Wright said.

Ambassador Wright also reiterated his gratitude to the government and people of Tanzania for supporting the Peace Corps program for the past six decades.

Due to challenges imposed by the worldwide COVID-19 pandemic, there are currently no Peace Corps Volunteers serving in Tanzania. At the reception, Peace Corps Country Director Stephanie Joseph de Goes said she hopes volunteers will return in 2022.