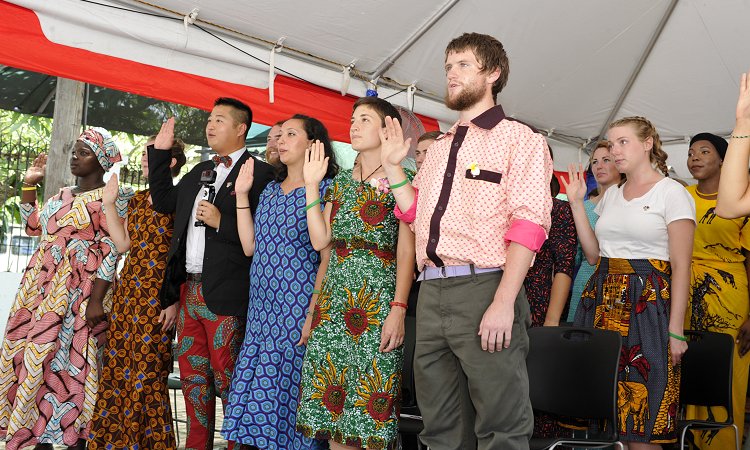 Chargé d’Affaires, a.i., Vincent Spera administered the official oath of service to the new volunteers in the presence of the guest of honor, Dr. Athumani Amir Pembe, Acting Assistant Director of Health Services and Nutrition in the President’s Office Regional Administration and Local Governments, as well as Tanzania Peace Corps Country Director Dr. Nelson Cronyn.  Former PCVs from around the world, officials from partner volunteer agencies, and families who hosted volunteers also attended the ceremony.

In his remarks, Chargé Spera described the swearing-in ceremony as a celebration of volunteers’ commitment to service and the durable partnership between Tanzania and the United States.  “The U.S. Government works across all areas – from governance to economic development to regional security – but the core of everything we do is focused on helping the Tanzanian people.  We do that best at the individual, person-to-person level, and Peace Corps Volunteers and their hosts and counterparts make that vision a reality every day,” he told the audience.

More than 2,850 PCVs have served in Tanzania since 1962.  The Peace Corps provides trained American volunteers who work with communities in the fields of secondary education (math, science, and information and communications technology), health promotion, and environmental education.

Founded in 1961 by President John F. Kennedy, the Peace Corps is a U.S. Government agency that supports about 8,000 volunteers in more than 60 countries. For 56 years, Peace Corps has maintained apolitical and non-sectarian ideals of technical and cultural exchange. More than 189,000 volunteers have served in 140 countries. Peace Corps promotes world peace and friendship by fulfilling three fundamental goals: