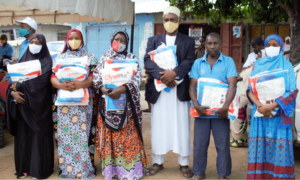 Last week, the United States government, through the U.S. Agency for International Development (USAID), completed distributing nearly 630,000 insecticide treated bednets (ITNs), reaching every registered household across the Zanzibar archipelago. The nets were procured through the U.S. President’s Malaria Initiative (PMI), and the Global Fund to Fight AIDS, Tuberculosis and Malaria, an international financing and partnership organization. It is expected that each bednet will protect two people against malaria.

Malaria is caused by a single-cell parasite which enters the blood of a person following the bite of an infected female Anopheles mosquito. In recent years, Zanzibar has seen an uptick in reported cases. Between 2019 and 2020, the number of registered malaria cases increased by 68 percent, reflecting an outbreak that prompted an increase in the distribution of bednets.

ITNs have been proven to reduce malaria illness, severe disease, and death due to malaria by protecting people from mosquito bites while sleeping. ITNs maintain effective levels of insecticide to repel mosquitoes for approximately three years, even after repeated washing. Tanzania’s significant progress against malaria is highlighted in the PMI 15th Annual Report. For example, ownership of insecticide treated bednets has increased to 78 percent (up from 23 percent in 2005).

PMI has been a proud partner of Tanzania since 2006, helping to decrease child death rates by 40 percent through investments totaling almost $613 million through last year. In just the past four years, $176 million have been contributed to deliver life-saving medicines, high-quality diagnostic testing and training for over 4,700 health workers. Through close collaboration with the people, institutions, and governments of Tanzania and Zanzibar, the U.S. government also strengthens health systems to reinforce and amplify Tanzania’s efforts to end this deadly, yet entirely preventable, disease.

Commenting on the successful ITN distribution campaign, USAID Mission Director V. Kate Somvongsiri remarked “The Governments of Tanzania and Zanzibar have made admirable progress in improving the quality and delivery of malaria services over the past several years. Our close collaboration is reducing malaria deaths and substantially decreasing malaria prevalence with the long-term goal of elimination.”