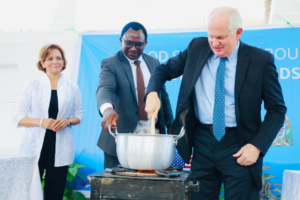 DAR ES SALAAM – Today the United States, through the U.S. Agency for International Development (USAID) is providing US$9 million in critical food assistance to bring immediate relief to the most vulnerable people in Tanzania. This new contribution will allow USAID’s partner, the United Nations World Food Programme (WFP), to provide life-saving food assistance to 204,000 refugees hosted at camps in north western Tanzania.

“We are grateful for this continued and timely assistance from the United States,” said Sarah Gordon-Gibson, WFP Country Director and Representative. “This contribution is critical not only because of the value of food going to refugees but also because of the economic impact it will make to Tanzania through the local procurement of food.”

WFP Tanzania has faced significant funding shortfalls since 2020 when rations had to be reduced to 68 percent of the minimum required needs. Prolonged ration cuts compromise refugees’ food consumption, nutrition and health. Despite this new funding, WFP is still unable to provide full rations for refugees due to chronic funding shortages related to the scale and number of humanitarian crises globally.

USAID is the largest donor to WFP’s refugee operation in Tanzania, providing approximately one-third of its annual refugee budget. Today’s US$9 million cash contribution – which is in addition to US$4 million provided by USAID to WFP in February 2022 – will be used to purchase over 12,000 metric tonnes of locally produced fortified maize meal to be included in the food basket that support refugees living in Tanzania’s two refugee camps. 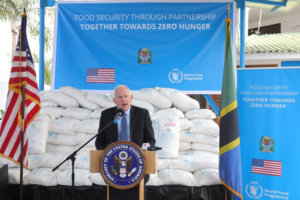 In his remarks at the event, the United States Ambassador to Tanzania Dr. Donald J. Wright urged the Government of Tanzania to ensure that the humanitarian needs of all vulnerable migrants in-country are met. “These problems – lack of access to livelihood opportunities, limited healthcare and education services, and malnutrition – are exacerbated by instability and rises in prices as a result of Russia’s unjust invasion of Ukraine, which is straining global food supplies, increasing fuel prices, and making the lives of Tanzanians – and refugees residing in Tanzania- more expensive and more difficult,” Ambassador Wright said.