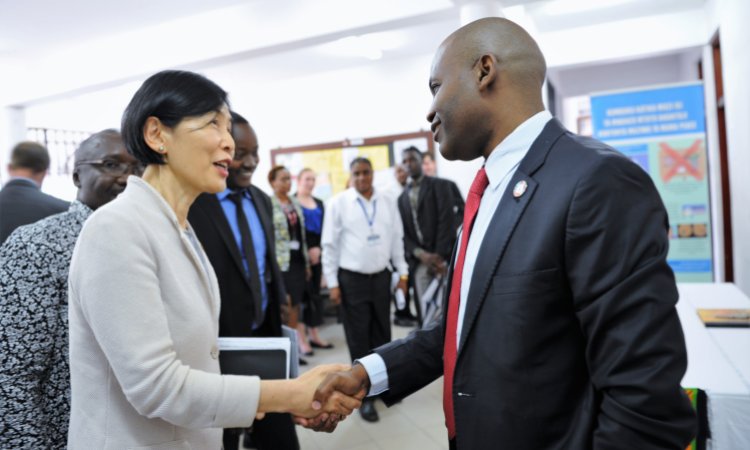 Dar es Salaam, TANZANIA. On Friday, May 4, Chargé d’Affaires of the Embassy of the United States of America Inmi Patterson announced during a visit to Mnazi Mmoja Hospital with Tanzanian Deputy Minister of Health Dr. Faustine Ndugulile, that the United States Government, through the President’s Emergency Plan for AIDS Relief (PEPFAR), has committed an additional $512 million (approximately 1.17 trillion TZS) to combat the HIV/AIDS epidemic in Tanzania.  Designed in partnership with the Government of Tanzania, PEPFAR’s Country Operational Plan seeks to bring the HIV/AIDS epidemic under control by September 2019.  The United States Government, through PEPFAR, has spent more than $4.5 billion (approximately 10.26 trillion TZS) to stop the transmission of HIV/AIDS in Tanzania since 2004.

“I am proud to announce today that through PEPFAR, the U.S. Government will spend an additional $512 million (1.17 trillion TZS) to improve HIV prevention, testing, and treatment in Tanzania through September 2019. The results from the Tanzania HIV Impact Survey in December 2017 showed us that Tanzania has fallen behind other countries in the region. Specifically, only about half of all people with HIV in Tanzania have been tested and know that they have HIV.  Tanzania must get back on track, and this will require far greater public awareness and people to get tested, urgent efforts to adopt new policies, and even quicker implementation of those policies.”

PEPFAR encourages everyone, especially men, to talk to a health worker about getting tested for HIV. Anyone who discovers they are HIV-positive can immediately begin treatment. Nearly one million HIV-positive Tanzanians are on lifesaving treatment, and most are living long and healthy lives and have such low levels of the virus that they are virtually unable to pass the virus to others, including sexual partners and their babies.

For more information on PEPFAR in Tanzania please visit the U.S. Embassy’s website at https://tz.usembassy.gov/our-relationship/pepfar/.

Program background and statistics on the impact of the program:

PEPFAR’s 15-year commitment to Tanzanians reflects the enduring value of our relationship with the Tanzanian people: