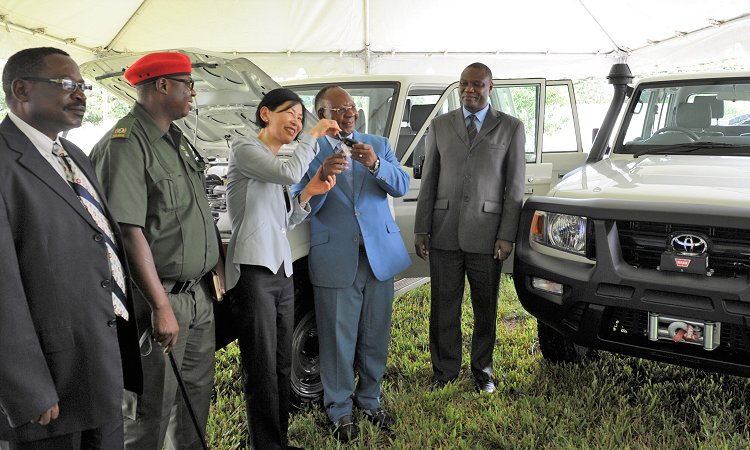 The hand-over to TAWA of three Toyota Land Cruisers increases the rangers’ ability to conduct anti-poaching patrols in the Rungwa/Kizigo/Muhesi Game Reserve, highlighting ongoing and robust collaboration between the United States and Tanzania. Speaking at the event, Chargé Patterson noted that, “through a commitment to partnership between the government, its citizens, development partners, civil society organizations, and the private sector, we can combat the scourge of wildlife trafficking.”

The United States Government is a proud partner for Tanzanian efforts to disrupt poaching and illicit wildlife trafficking, including through providing training, equipment, and capacity building to increase rangers’ ability to thwart poaching in the Rungwa/Kizigo/Muhesi Game Reserves. Current U.S. supported projects also include installation of a telecommunications system, renovation of two ranger posts, and installation of a pulley system across a river to allow for year-round access to the eastern side of the reserve. “Recent success is cause for optimism,” said Chargé Patterson, “but the fight against poaching and illegal wildlife trafficking is not over. The United States Government is proud to stand with you in this effort.”

Through cooperation with TAWA, the U.S. Embassy works to preserve wildlife habitats through a wide range of coordinated efforts. For three years, this bilateral partnership has focused our efforts on collaborating with game park rangers in planning and executing focused patrols which equip Tanzanian defenders of wildlife with information. This work requires tools and the U.S. Government responded by supplying rangers with maps, GPS systems, tractors, trailers, and renovated ranger posts.