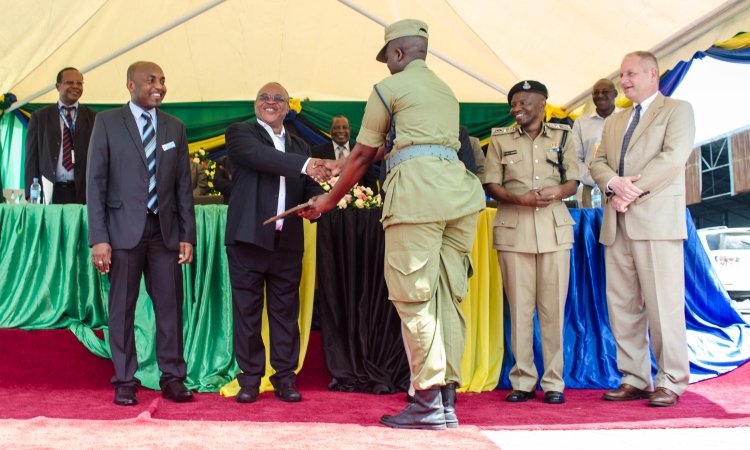 Minister of Natural Resources and Tourism Hon. Professor Jumanne Maghembe awards a certificate to a Tanzanian Police officer upon the completion of a canine detection training program from U.S. Customs and Border Patrol (CBP).

On March 2, 2016 at the Port of Dar es Salaam, U.S. Chargé d’Affaires, a.i., Virginia Blaser, Minister of Natural Resources and Tourism Hon. Professor Jumanne Maghembe, and Deputy Minister of Home Affairs Hamad Masauni inaugurated “Canine Detection Program Tanzania.”  The event marked the culmination of an intensive training program for four Tanzanian police officers and their canine partners by officials from U.S. Customs and Border Protection (CBP).  The implementation of this new program will enable Tanzanian authorities to disrupt trafficking networks by catching illegal shipments of drugs and wildlife products at the port and international airport in Dar es Salaam.

Speaking at the event, Chargé Blaser noted that continued cooperation across the government is needed for the program to succeed.  “This whole-of-government approach must extend beyond the identification of smuggled goods, and ensure that identification results in the arrest, trial, and incarceration of the criminals who seek to profit from the destruction of Tanzania’s natural heritage and stability.”

At the event, Minister Maghembe and Deputy Minister Masauni presented certificates of recognition to the four officers from the Tanzania Police’s Dog and Horse Unit, who were specially selected for the program by the Office of the Inspector General of Police.  In 2015, the four officers were paired with detection canines and attended training at CBP’s world class facility in El Paso, Texas.  In February 2016, CBP officers conducted on-the-job training at the airport and port in Dar es Salaam.  During the inauguration event, the officers and canines offered a demonstration on their ability to detect illegal goods, successfully identifying sample boxes containing drugs and an elephant tusk.

Minister Maghembe said in his remarks “We deeply appreciate efforts that the U.S. government is taking to cooperate with our government to ensure the survival of these big populations of wildlife that are still available in the wild.  These collective efforts will make it possible for these populations to grow back again to the levels they used to be in the past”