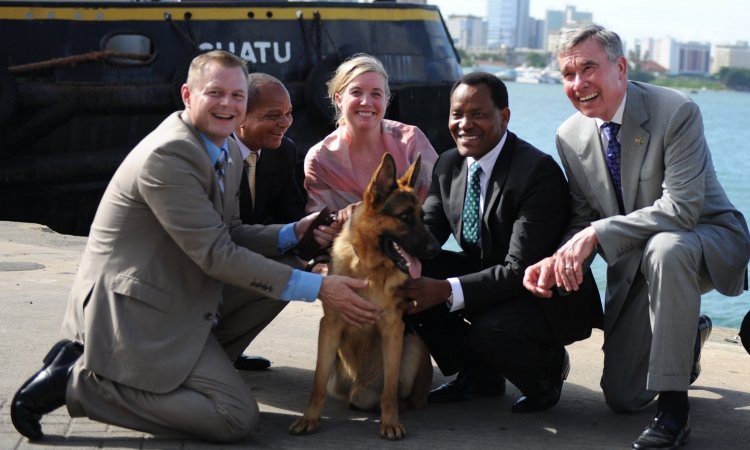 On May 5, 2015 at the Port of Dar es Salaam, U.S. Customs and Border Protection (CBP), along with the Ministry of Transport, the Ministry of Home Affairs, and the Ministry of Natural Resources and Tourism announced the launch of a new “Canine Detection Program” in Tanzania.  Through this program, Tanzanian police officers with specially-trained dogs will be posted at the Dar es Salaam Port and the airport to help detect heroin and ivory.

CBP Commissioner R. Gil Kerlikowske was joined at the Port by Minister of Natural Resources and Tourism Lazaro Nyalandu, Acting Director General of Tanzania Ports Authority, Aloyce Matei, and U.S. Chargé d’Affaires, a.i. Virginia Blaser in describing the innovative new cooperative program.  Over the coming months, Tanzanian police officers will attend highly specialized training at a CBP facility in the United States.  They will return to Tanzania with dogs trained to detect heroin and ivory.  These officers and their assigned dogs will be stationed at the Port and the airport, and will be a critical element in the fight against the trafficking of illegal drugs and wildlife products.

“Canine programs provide a valuable addition to detection capabilities at ports of entry,” said CBP Commissioner R. Gil Kerlikowske.  “We are pleased to work with our partners in Tanzania to provide CBP’s canine expertise in expanding their program and, for the first time in CBP history, extend the canine detection capability to ivory.”

U.S. Chargé d’Affaires a.i. Virginia Blaser noted “The canine detection program we’re launching today is a great example of what we can achieve with all the right people working together through a whole-of-government approach to fight illicit trafficking.  One organization, one agency, one ministry, one country, can’t do it alone.  To catch and stop poachers and drug traffickers, we must all work together.”

In addition to the initial training of police officers and providing dogs, CBP will assist in other aspects of the program, such as the development of an effective administrative management system, continued training, and a health program for the dogs.  This new collaboration builds on a long-standing partnership between Tanzania and the United States in security and law enforcement operations.  For example, CBP has trained more than 200 Tanzanian police and wildlife personnel through the Regional Rural Border Patrol Unit, and this year ten Tanzanians will participate in an upcoming Instructor Program that will equip them to teach the Regional Rural Border Patrol curriculum.

U.S. Customs and Border Protection is the unified border agency within the U.S. Department of Homeland Security charged with the management, control, and protection of U.S. borders at and between the official ports of entry.