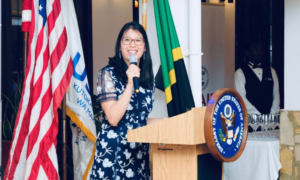 On November 23, the United States government held a reception to commemorate 60 years since the U.S. Agency for International Development (USAID) was founded by President John F. Kennedy. For six decades, USAID has built its reputation as a world leader in international development by partnering with countries around the world to strengthen communities and improve lives.

In more than 100 countries around the world, USAID’s team and partners work together on development and humanitarian projects that help save lives, reduce poverty, strengthen democratic governance, and improve health, education, and economic prosperity.

USAID has supported Tanzania since 1961. Today, USAID is working closely with Tanzanian people, businesses, civil society organizations and the government to support Tanzanian youth to advance the country’s long-term prosperity and self-reliance.

Speaking at yesterday’s reception, United States Ambassador to Tanzania Dr. Donald J. Wright remarked, “While we strive for a self-reliant Tanzania, no country is an island and we must all work together. As our world becomes more connected, we face new, 21st century challenges, such as climate change, digital technology threats, and emerging diseases.”

The Ambassador continued, “These issues can only be dealt with through collaboration, cooperation, and mutual respect. That’s why we, the American people, and the U.S. government are committed to working hand in hand with our Tanzanian colleagues in government, civil society, and the private sector to tackle the challenges of today, for a better tomorrow.”

There is no better evidence of this mentality today than USAID and the government of Tanzania’s joint efforts to combat the COVID-19 pandemic. To date, USAID and the Department of State have provided more than $9.8 billion to fight COVID-19 in more than 120 countries. In Tanzania, the U.S. government has donated more than 1.5 million vaccines and USAID has contributed over $25 million to defeat the COVID-19 pandemic.

Also speaking at yesterday’s reception, USAID Mission Director V. Kate Somvongsiri remarked, “The United States and Tanzania have had a long partnership, one that I am sure will continue for generations to come. We believe strongly in helping countries around the world become more self-reliant. But, self-reliance isn’t an end unto itself. This world will only thrive through mutual support. Each nation can be its strongest when we help one another.”

As we have done for 60 years, the U.S. government will continue to work closely with the government and people of Tanzania to improve lives and opportunities for people in both of our countries.