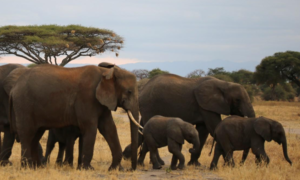 The digital event, “Celebrating USAID PROTECT: Five Years of Conserving Tanzanian Wildlife,” highlighted successes of the project, including how it contributed to reducing poaching in the country by 80 percent, according to the Ministry of Natural Resources and Tourism.

“Many of USAID PROTECT’s interventions will leave a lasting foundation for Tanzania’s conservation. The project has engaged national level membership bodies and locally based companies to leverage their influence and assets for conservation efforts. This has resulted in the preservation of more than 300,000 hectares of biologically significant areas and a considerable reduction in poaching and unregulated fishing.”, said USAID Acting Mission Director, V. Kate Somvongsiri, who opened the webinar.

USAID PROTECT, a five-year $19.1 million project, was conceived in the middle of a poaching crisis in Tanzania with a loss of 60 percent of the country’s elephant population between 2009 and 2014 alone. To effectively address this problem, the project used an innovative approach involving not only traditional conservation partners, but also Tanzania’s parliament, judiciary, private sector, and the media. As a result, Tanzania was better prepared to fight wildlife crime on all levels though stronger wildlife crime policies, a better understanding of how to identify wildlife trafficking and try wildlife crimes. The project supported various targeted initiatives, such as interregional exchange programs and trainings to fight this multifaceted and organized crime.

USAID PROTECT partnered with Tanzania to improve a policy framework on wildlife corridors through the development of its historic Wildlife Conservation Regulations (Wildlife Corridors, Dispersal Areas, Buffer Zones and Migratory Routes), as well as the Wildlife Corridors Assessment Prioritization and Action Plan. This will ensure that wildlife movement corridors, dispersal areas, and buffer zones are secured to allow wildlife to freely move between protected areas.

To learn more about the USAID PROTECT project, visit: https://www.usaid.gov/documents/1860/promoting-tanzanias-environment-conservation-and-tourism-project-protect